A young soldier, who served in Afghanistan, has been named as the winner of the record breaking £13.2 Mega Moolah win last Tuesday.

Jon Heywood, 26, from Crewe, Cheshire won the enormous prize playing Mega Moolah jackpot slot at Betway Casino playing only 25p a spin. What was even more staggering is that after the win Jon kept quiet about it for 3 days, even going into work the next day as if nothing had happened.

Speaking to the press about his win Jon said: “I couldn’t believe that I’d won all this money at the time – and it still hasn’t sunk in.”

“It’s amazing. The first thing I will spend it on is the best possible medical treatment for my dad.”

“That’s more important than anything. Family comes first and I’d give all this money back for him to be healthy again.”

Jon also plans to by himself a luxury car win his new found fortune, with a Bentley Continental GT at the top of his shopping list.

Alan Alger, a Betway spokesman, said: “We couldn’t be happier for Jon – he’s an incredibly nice guy and his family will benefit immensely from his huge win.” 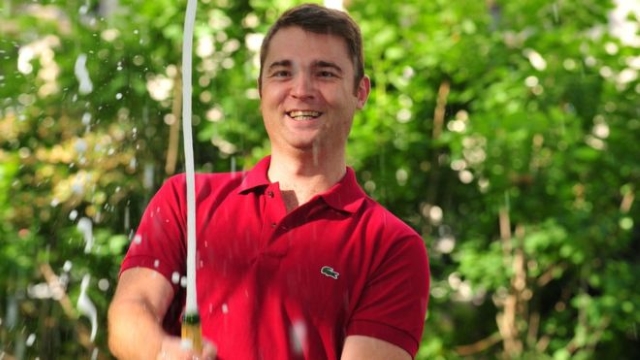 Jon gets the bubbly flowing after his huge progressive jackpot win