In 1995 UK scientists became the first to successfully clone an animal from an adult cell by inserting the cells directly into an egg. Dolly The Sheep was then born on the 5th. July 1996, having been produced in a lab as is explained here. Years after her passing, she herself was cloned and today there are another 4 identical ‘Dollies’ – see below (Daisy, Debbie, Dianna and Denise) who in July 2016 are all happily 9 year-old’s. 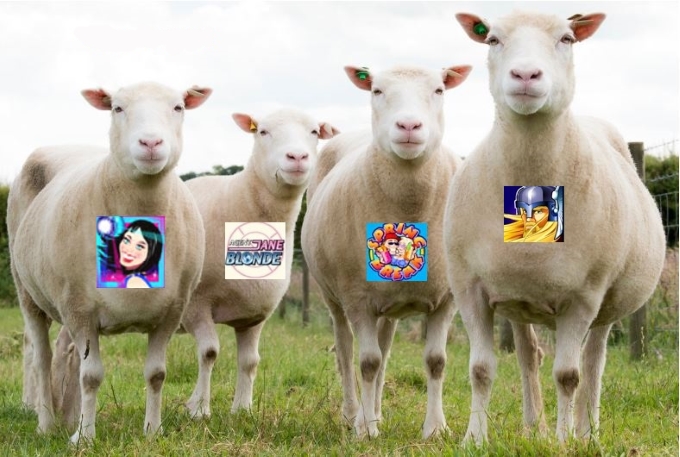 Dolly the sheep had sisters – 4 of them. In the same way Thunderstruck has now many identical sisters

Identification
Shortly after they were born their keepers at the university wanted a simple way to identify them from afar, without having to pursue the creatures around the field in order to read their ear tags. One of them asked her young children to help and between them they drew some pictures on some peel-and-stick paper. These were applied hence to the sheeps’ chest areas where their woollen coats ensured they would not easily fall off. Then it was a simple matter for the staff to observe their behaviour and welfare through a pair of binoculars from the comfort of the lab window.

The link
A few years later slot developer Microgaming allegedly heard of this story and designed a range of games based on the scientific principle of cloning – get 4 for the price of one! So it is believed they wrote the code for a 9-line 5-reel slot and inserted the exact same code into several other slot game titles. Unfortunately, it worked and they had the same problem – how do we distinguish between them? In the spirit of things it is alleged that they decided to obtain a copy of the designs the children made for Dolly’s sisters. Thereafter they could easily identify the cloned slots at a glance.

Conspiracy theory
Appropriately, on the 20th. anniversary of Dolly’s birth back in July 1996, Microgaming have recreated Dolly again in July 2016! They gave her a Karaoke theme as that was introduced around the same time as she was born so we have 9-line slot with 2x Wilds and 15 free games at 3x multiplier the same as her 4 sisters. Karaoke Party completes the set of 5, the rest being Spring Break, Agent Jane Blonde, Thunderstruck and Ladies Nite. Is this timing purely a coincidence or have Microgaming been running a cloning program mirroring that of the scientists behind the infamous Scottish cloned sheep Dolly and her 4 siblings?

What doesn’t remain a mystery is that Microgaming’s cloning program looks set to continue as the company continues its delivery of at least 3 new slots a month. Although rarely are any of them new, simply clones of previous favourites….