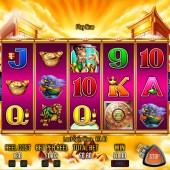 The slot game Imperial House from Aristocrat follows a range of oriental-themed slot machines to be released online. Many readers will have played the extremely popular Choy Sun Doa or the superb 50 Dragons. Imperial House has a slightly lower profile than some of these other slots, but it is still very popular amongst players.

All Aristocrat slots available online are proving to be successful transitions of their land-based predecessors and I have been very impressed with the developer's releases so far. There is always a concern that when a land-based developer turns its focus to converting its slots to the online platform that there could be an issue of lost in translation but Aristocrat slots fans will be pleased to hear that, from my experience, this has certainly not been the case and Imperial House is another example of that being true of Aristocrat's online slots.

Reel the Power with 8 Free Spins

Imperial House is part of the ‘Reel Power’ range from Aristocrat, giving you an enhanced 243 way to win on the reels. However, in my experience the majority of decent wins come from hitting the free spins bonus round. If you land 3 scatters on any of the reels at the same time then you will instantly be awarded 8 free spins.

The added extra in Imperial House is that you get an extra Wild, which you can place anywhere between reels 2-5. Your multiplier is then governed on where you placed your Wild, which is held for the remainder of the free spins. If your Wild forms part of a winning line then you choose a lucky animal symbol to reveal the multiplier. If you go to the ‘video’ tab on this page and watch my bonus video it will make more sense.

If you like Aristocrat slots then there’s a good chance you will enjoy Imperial House slot. Personally, I prefer the awesome Buffalo slot, which has a great bonus round that is easily re-triggered. However, Imperial House is new on me and I will have to give it some time before making my mind up. Just as I am writing I have hit 5 of a kind in the bonus with a 5x multiplier, giving me nearly 140x my stake – perhaps it’s growing on me!