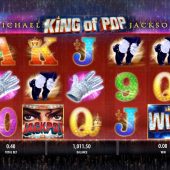 The global superstar Michael Jackson was very much the King of Pop during his career. His music lives on beyond his death and so does the merchandising around his name as a brand mark. The Scientific Games-owned company Bally has released an online version of their popular land-based slot machine Michael Jackson King of Pop, which brings together songs, video clips and symbols from the music icons past.

The game has a classic format of 5 reels and 25 paylines and contains lots of symbols associated with Michael Jackson. These include the Moonwalk shoes, sunglasses, trilby hat and glittering glove. Joining these symbols are the classic A-K-Q-J-10-9, along with Wilds, Bonus symbols and Jackpot symbols. For super-fans of MJ you will find clips from his songs accompanying the bonus features such as the Beat It and Smooth Criminal free spins. During the base game you are played one of his most famous tracks ‘Dirty Diana’ over and over again (to the point that you may end up hating this song).

Moonwalk your way to random wins during base game

During the base game in Michael Jackson King of Pop a bonus feature can randomly activate. Between 2 and 5 Moonwalk Wilds will appear as MJ Moonwalks across your screen. All winning lines featuring a Moonwalk Wild will have a 2x multiplier applied. This feature can deliver the occasional nice win, but in general it is fairly tame.

Land the bonus symbol on reels 2, 3 and 4 simultaneously and you will activate the bonus feature in Michael Jackson King of Pop slot. Just as in NetEnt’s Guns ‘N’ Roses slot you will get to spin a wheel (shaped a bit like a vinyl record) which will land on one of the following:

Beat It free spins – This feature awards 10 free spins with Sticky Wilds appearing across the reels during the feature. Each time the feature breaks to the video clip of Beat It you know you will be awarded at least 1 extra Wild.

Cash Win and Cash Win + Multiplier – If you don’t land one of the free spins features then you will be awarded a simple cash prize. This has the option to go to a further internal wheel that contains a range of multipliers.

Just when you think there are no more ways to squeeze money out of the troubled star, somebody somewhere finds a way. There are all sorts of moral issues that surround Michael Jackson, what I don't want to go into here. Lets just say the intention by Bally is to celebrate the music of this once great musician. Michael Jackson King of Pop, just like NetEnt’s Jimi Hendrix slot, is a low volatility slot. Therefore you will see regular wins with smaller payouts. With a 96.1% RTP (return to player), you could be playing for hours with little lost or gained – just the Dirty Diana track playing over and over and over in your head until you are ready to explode. 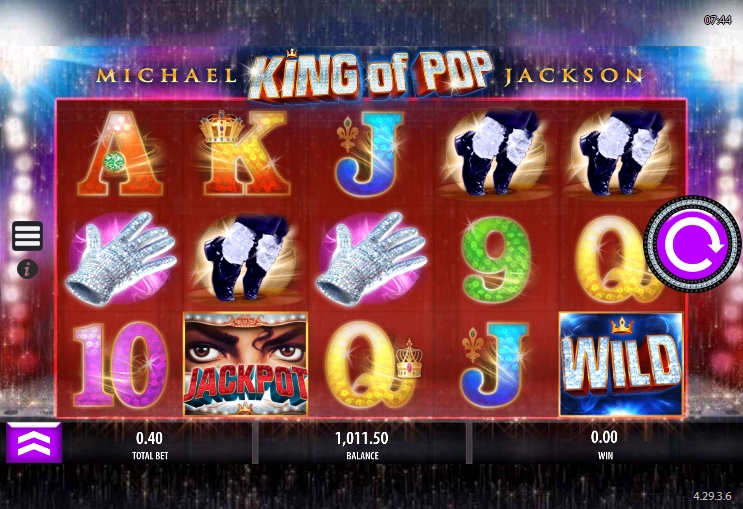