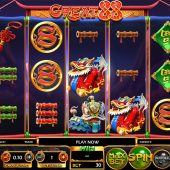 Betsoft Gaming are renowned for their bright polished graphics and Great 88 is no exception. For those of you familiar with Chinese culture, you will be aware that 8 is their lucky number and that is the case here. Almost every slot with 8 or 88 in the title will be China themed.

Bring on the Dragons
We start with the familiar 5-reels 3-row format and  30 paylines, with plenty of Chinese symbols on display, including Dragons, Fireworks, Golden Coins, Ignots and more. There is a Wild in the form of a string of (8 naturally!) firecrackers and if you should get 5-of-a-kind (5OAK) you will be rewarded, with? Yes! 8888 coins about 296x stake. The Wilds aren't stacked but the rest of the symbols are present in singles, 2's and 3's. The 3 lowest-paying symbols only pay 5/6 of a credit for 5OAK so we get an idea of the higher volatility of this game!

Lucky Boxes
On Great 88 the lucky boxes are the scatter symbol. 3 anywhere will initiate any of the 5 following features. You don't choose the feature yourself which I know some can find annoying when yearning for the free spins, but there is potential in one especially.

Your first feature is Dragons and Lions, which aside from Wilds, are the highest-paying symbol. Should you reveal these, they will be added to the reels in order to produce winning combinations with the chance of a lucrative end result.

The next option is the Bronze Coins. You will reveal 1-3 coins of which each can award 1-5x stake. The highest win is therefore 15x stake, so of all the options this is the one with lowest potential and one which could make you wish you had a knowledge of profanities in the Mandarin tongue...

The third are the Firecracker Wilds. Each box offers a Wild which explodes and adds either 1 or 2 Wilds to the screen which may or may not award a decent win. Again, get the Mandarin Profanisaurus off of the bookshelf!

The penultimate choice is the Jade Free Spins. Each box has 1-3 jade coins which each award some free spins. You will get between 3-25 and there are no jade boxes therefore no retriggers during these. The reels are thus changed for a higher likelihood of wins.

We leave the feature with the most potential until last. The boxes may contain Golden Dumplings and each one you get awards one spin on the Bonus Wheel. The wheel can award 8 free spins with enhanced reels, 5,10 or 20x stake or a chance on the Mega Bonus Wheel. You could get for example with 3 dumplings the 8 free spins, a cash award and then a Mega Wheel spin. The Mega Wheel is where it's at! On this there are only 3 results - 100x stake, 750x stake or an incredible 6000x stake!!!!! The Golden Dumplings are obviously thus what you need to see in the 3 boxes...

Our View...
Great 88 has fantastic graphics and animations but be aware it's quite a volatile game. Despite this the 3 boxes appear reasonably frequently but reel win frequency is quite low and many of those will be less and 1x stake. I found playing Great 88 is like lighting the string of firecrackers and seeing how long you dare let the fuse burn before dropping them and running! Having said that if you can tolerate not getting the feature you wish for in the boxes each time, then it will be a very enjoyable visit to the Orient..... Similar themed slots, which are equally volatile, include 50 Dragons from Aristocrat and Ainsworth's Dragon Lines - both excellent alternatives.