It Came From Venus slot

It Came From Venus slot review 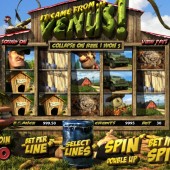 Betsoft Gaming is fast becoming one of the most innovative slot game developers in the gaming industry.

It Came From Venus is further proof that this manufacturer is hitting the right notes when it comes to releasing top slots.

The sci-fi centred slot is a non-progressive 3D game that has 5 reels and 30 paylines with a theme that looks like a cross between the musical Little Shop of Horrors and movie Day of the Triffids.

The plot behind It Came From Venus is that you are taken to the farm of a farmer called Skeeter.

His farm was visited by a giant Venus fly trap that has come from the planet Venus. This game is packed with special features which provides exciting slot gaming from the very start.

A Game Packed with Wilds

You can also enjoy a fantastic chance to win big with the Feed Me Free Spins Bonus.

You will be awarded 11 free spins if the flytrap animation gobbles up three Food Sack symbols on the middle reel.

During the bonus feature there is a sticky Wild symbol which will become active if you hit a Food Sack symbol on the middle reel during the free spins.

Save the Venus Flytrap to Win Prizes

The main bonus feature is triggered when you hit three or more Helicopter symbols across the reels. This is where the real action starts.

When the feature is activated, the military capture the Venus flytrap and place it in a box before transporting it to their army HQ.

It Came From Venus also has stacked collapsing wins giving you another way to win big money. You will win through this feature if an entire reel becomes stacked with the same symbol. The stack then collapses and you are awarded with a prize depending on which symbol has become stacked on that reel.

There is no mistaking that It came from Venus takes slot gaming to a new level, both in terms of graphics and gameplay.

The slot has the cheesy factor of Betsoft Gaming’s Mr Vegas and the exciting pace of the travel-themed Aztec Treasure from the same developer.