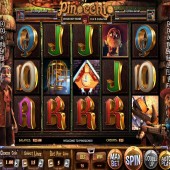 If you were a child that grew up reading fairytales or watching Disney movies then you will be more than familiar with the fable of Pinocchio. The endearing story of the wooden puppet who dreamed of one day becoming a real boy was written by Italian author Carlo Collodi back in 1883. It has since inspired several interpretations on stage and screen with the 1940 Disney production undoubtedly proving to be the most popular.

Now, Pinocchio once again readies himself to invade the slots market in this 5 reel, 15 payline title from 3D developer Betsoft Gaming. Symbols on the reels include Pinocchio, a cage, a show poster, a carpenter's tool, cuckoo clock, and the regular 10-through-to-Ace symbols. The only question I have is where is Jiminy Cricket?! Jeez, I love that little guy!

Not for the Newbies

The first thing I will say is that this slot is probably not one for beginners. It does not have the usual set up of a simple Wild, Scatters, and bonus features. There is much more on offer and that is certainly something that excites me as an experienced player but has me a bit wary for novice slots players.

Pinocchio is formed of three different worlds for you to play in. This is something you might associate more with Dungeons and Dragons – Treasures of Icewind Dale by IGT rather than a Betsoft Gaming slot but that's the lay of the land here. You start in the Workshop World but you can collect symbols on reels 2 and 4 to be transported to different worlds. If you collect 10 wagon symbols then you will be transported to the Stage World. If you collect 10 book symbols then you will be transported to the Classroom World. Each time you enter the Stage or Classroom Worlds then you will have 8 spins to play before returning to the Workshop World. Every time you hit a win on one of these 8 spins, your spin count will not decrease.

Watch the Wild Scrolls Walk
These Scatters can also trigger the Wild Scroll feature. This occurs when the Scatter appears on reel 3. A Wild symbol will then appear on the right hand side of the reels and move across the reels from right to left moving a position for every spin. It is possible for more than one Wild symbol to appear at the same time. If you've played NetEnt's The Invisible Man then you will get the idea... except without the "colliding" aspect of it.

This slot also comes with Fairy Awesome Re-Spins. I am certainly a fan of any feature that has the words “awesome” and “re-spins” in so this was great to see. This feature is basically included to help you out if you narrowly miss out on a win. If the position of reels 1, 2, or 3 is the only thing that stops you from hitting a win then your fairy companion will appear on the reels and re-spin that reel to help you try and hit a winning combination.

Finally, the story of Pinocchio is all about his struggle to become a real life boy. So Betsoft Gaming have ingeniously included this part of the tale into this slot. You must try to collect mini real boy icons that are located on the bottom right of some symbols. When you collect 5 of these icons Real Boy Mode will be triggered. The wooden Pinocchio symbols will then dynamically turn into real boy Pinocchio symbols and will become Wild. These Wilds substitute for all other symbols, except for Scatters, to complete any potential wins across the reels.

As mentioned at the start of this article, this slot is not really one for the new players. The different Worlds, changing Scatters, re-spins, and Real Boy Mode make for quite a complex slot. Personally, as a fan of Betsoft's other fairytale-themed slot Enchanted, I enjoyed it and it is further evidence that Betsoft Gaming not only know how to develop visually striking slots but ones that play well too. The 2by2 slot Pinocchio's Fortune that was released on Microgaming's Quickfire platform is the only other Pinocchio-themed slot even slightly worth your time but I have to say that this is the new kid on the block.