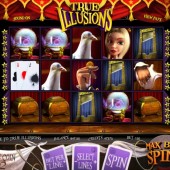 One of the most interesting games to come out of the Betsoft development studios is the magic-themed slot True Illusions. I like this slot for many reasons, such as the original format and sharp graphics throughout the game. There are also some pretty good bonuses, including held wilds and free spins.

Who Is This Professor J Magick?

The character Professor J Magick stands to the left of the reels, adding comments from time to time in his strong English accent. He plays a pretty major role in the game, with his glamorous assistant on hand to be part of the magic show.

They both feature in the Wild Reel, which is triggered by landing 3 stacked wilds on the center reel. The game goes into 3D mode, with Professor J Magick guiding his assistant into the box. He locks the door and drives in a number of swords, but she has vanished when he re-opens - it must be magic!

The whole middle reel is locked for up to 7 spins and is wild, which can give you some decent wins. Do not change your coin of bet amount at this point as it will end the feature prematurely.

Win Free Spins When You Hit the Professor on the Reels

There is also a free spins bonus which is activated by three or more Professor J Magick symbols anywhere on the reels.

During the free spins you will get cascading reels, sometimes known as tumbling reels. This is a similar feature as seen in Net Ent’s Gonzo’s Quest slot and it can be very rewarding on occasion.

The last of the bonuses in True Illusions is the pick a card, any card bonus, which is triggered by three or more card symbols anywhere on screen. When you make your pick you are rewarded with instant bonus credits.

True Illusions offers a lot as a slot game and I do enjoy playing it from time to time. I has a bit more going for it than other Betsoft slot games such as Tycoons or House of Fun.