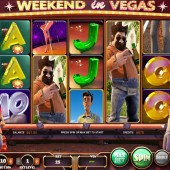 What happens when the biggest competitor in your market gets the rights to launch ‘The Hangover’ slot? Well, if you are Betsoft, you release a crude imitation, with similar characters, similar scenes and call it Weekend in Vegas (and probably hope that Warner Bros don’t sue).

Hungover from a Weekend in Vegas

Despite their lack of originality, 3D slot developer Betsoft has created a nice looking slot. It’s glitzy, its very Vegas and it could potentially be popular. The three characters in the slot game, mirror the three individuals from the hit film. They are individually stacked across the reels, taking up three symbol positions wherever they appear. The police car makes an appearance as the scatter and the world renowned Vegas sign is a wild. Ace through to 10 make up the remainder of the symbols.

Land three or more police car Scatters and you will trigger 8 - 20 free spins with 2x payout on all standard and scatter wins. This feature can retrigger if you land 3 or more scatters. At the end of the free spins you will get a chance to boost your bonus win with a Money Wheel. If you can get into the central part of the reel then you will be in for much larger rewards.

The three characters, Loony Larry, Cautious Chris and Balanced Ben can also trigger a bonus if three or more appear stacked on the reels. You need to fill all 3 positions on the reel to achieve this. Get 2-4 and there will be an extra re-spin to see if you can add one of the same characters to the reels. Get 3 or more of the characters and you will release a pick’em bonus round, almost identical to the one you get in The Slotfather from Betsoft. The three men cruise the strip, dropping into casinos that you choose for them. If you are lucky you will get to visit a few, picking up wins each time.

Not only is the theme of this slot a rip-off, but the actual game engine is a re-run of stuff we have seen from Betsoft in the past. A lack of originality and some piggy-backing on the achievements of others doesn’t really do much for me.  This isn’t one of their finest hours and I would be surprised if this slot becomes a hit. It would be great to see this company producing more slots like Heist or Good Girl, Bad Girl slot.