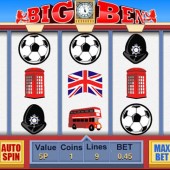 Think of iconic London landmarks and your mind immediately turns to horrendous traffic, people who don’t talk to each other, a tube system hopelessly out of date, and legions of pop-up burger joints run by hipsters. Yep, living in London is great! But if you’re a tourist, London is probably summed up perfectly by two words: Big Ben.

On the Reels...
Cozy Games have taken London’s leading landmark (fact fans: Big Ben is actually the name of the bell inside the tower, not the tower itself) and bestowed upon it a nifty 5 reel, 9 payline mobile slot that comes complete with graphics straight off a tacky postcard. There are two bonus features, but more of that later.

Symbols
On the tacky postcard – sorry, the reels – we get plenty of iconic (read: stereotypical) symbols of London: a soldier in a Bearskin, a red phone box, a policeman’s helmet, a football, a London bus, a union jack, and a map of Britain.

Big Ben is Wild
The Big Ben icon itself is Wild and substitutes for all regular symbols in the game other than the Scatters. Hit three Diamond Scatters anywhere and you’ll play a straightforward Pick ‘em Bonus round where you get to choose from a line-up of atypical British soldiers. Choose correctly and you’ll bag some juicy cash.

Win up to a $30,000 Jackpot
Land three or more Royal Crown bonus symbols, meanwhile, and you’ll be taken to the Bonus Ship Treasure round! Collect the treasure and your multiplier will be applied to your total line bet. The bonus round can also be retriggered for further winnings. Do particularly, spiffingly, well and a $30,000 jackpot can be yours.

Our View...
This slot is simple and fun to play, and the interface nicely designed for smartphones and tablets. The paytable info is a click away and the spin buttons big enough to access without taking anything away from the reels. For more Brit slapstick, check out Blueprint Gaming’s mobile version of their comic-book themed slot, Viz, while the cheeky comedy capers of Doctor in Love will have you hankering for a 1960s sex comedy in seconds. Whether this is a good thing or not depends on how much you care for your 1960s British sex comedies, of course.