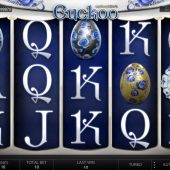 Cuckoo slot could have a theme revolving around birds or clocks, and if you chose the latter you'd be correct although Cuckoo eggs do appear on the reels. We have an artistic theme of silver and blue with a blue background and silver icons while some soothing classical music plays in the background and some cool animations with the winning symbols on which roses materialize. So will Cuckoo slot wake you from a slumber?

The game has 10 pay lines in common with other Endorphina slots such as the smoking-themed Diamond Vapor and Slotomoji slot and you may guess that it is equally as volatile as those. The pays begin with card values which are stacked up to 3 rows high on this 5-reel game and pay 10 or 15x your bet for a 5-of-a-kind win. The remaining symbols are the Cuckoo eggs which are highly decorative in the fashion of the famous Faberge Eggs from Russia. The Gold one pays 500x bet for 5, the Silver Egg 250x and the Blue and White Egg 100x bet. You also get 5x stake for any 5 mixed. Unlike the card values these all appear singly, as do the slot's last icon which triggers the bonus.

If you see a decorative blue and white porcelain plate clock today, it won't be on Grandma's kitchen wall but on reels 1, 3 and 5 of this game. This will trigger one of the most unusual and quirky bonuses I have ever seen but potentially very rewarding!

You are faced with a large version this clock with the hands set at 10:10. There is a gold alarm setting needle like you would have on an old mechanical alarm clock. This will be on 3 o'clock and you move it clockwise to increase a stake multiplier - the further round you move it the higher the 'risk' meter goes on the left on the screen. The clock has a hidden alarm setting - cross over that and your bonus is over! Should you get your golden alarm needle all the way round to where you started without triggering the alarm you will get an award of 12 hours x 100 bets or 1200x stake! You can stop at any point though before you trigger the alarm and collect the award currently accumulated, depending on how brave you are. If you do get it all the way round you get a second go too, having already banked the 1200x bet. This is how you could achieve the maximum award possible of 2400x bet. If and when you do hit the alarm, the yellow Cuckoos will bounce out from the clock on springs and mockingly taunt you for your failure.

Cuckoo slot is typical of Endorphina games by being quite high in volatility and has the standard 95-96% RTP of their slots. The base game pays though are quite frequent and should give you enough recycling of your balance to trigger this absolutely mad feature! I actually hit 1200x bet the first time I got it, but only got 10x bet on the second go before the dreaded Cuckoos sprang out to mock me. This feature gives you genuine tension and raises blood pressure as you edge that needle round having say passed 200x bet and knowing you could just be about to set off that hidden alarm. I have to say I'm impressed with this idea and the slot's graphics and sounds overall. Will this Cuckoo wake you up today?