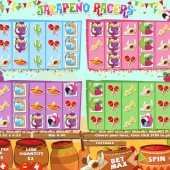 If, like me, you’re a chilli addict, you’ll know that one chilli is never enough. Online slot developer Gamesys obviously feel the same, as instead of the regular one game going on in their Mexican-tinged slot, Jalapeno Racers, they’ve got four! Yes, that’s right, in Jalapeno Racers you get to play four games all on the same screen. Think multi-tabling is just for online poker players? Think again.

Jalapeno Racers is a 5-reel, 20-payline slot. Play four games at once and that makes a total of….well, you do the maths. And if you’re intrigued by the ‘Racers’ part of the title that comes in picking a character and ‘racing’ him off against his rivals. Did someone say ‘Mario Kart’?

So, do the graphics match the gameplay? Well, there are enough Mexican images to put an El Paso taco commercial to shame: cacti (cactuses?), sombreros, maracas, trumpets, plus our four racing characters – all are here.

The Wild is on Fire!

Look out for the Flame symbol on reels 2, 3, and 4 – it acts as the game’s Wild. It’s a stacked Wild to boot, so it can stretch like a raging chilli burn up the reels. It substitutes for all other symbols in the game, other than the Race symbol. Not only that, land a Wild on one slot and it will automatically appear in the same position on all your four slots, so it’s definitely profitable to bag those fiery flames!

Race to Victory… and a Bonus Prize!

The Scattered Race symbol is your key to unlocking the special game. Land four of those symbols on reels 2 or 4 in any of the four slots and you’ll set our animals – Ringo the Flamingo, Basil the Tortoise, Burro the Donkey, and Walter the Warthog – against each other in a race to the finish while you reel in the cash.

And make sure you watch out for the Race Finish Bonus symbol as this will pay you an extra bonus prize if any of your animals finish the race.

Fun and frantic, with a unique multi-game feature, this is a great one for the funsters. I loved the gamble of having four slots on the go at the same time, and the propagating Wild makes life very interesting indeed.

If you like this, you’ll like iSoftBet’s food-themed video slot, Spicy Chillies, which follows a similarly comic style.

Elsewhere, Betsoft Gaming’s attractive Mexican-themed slot, Paco and His Popping Peppers (try saying that after a few tequilas) is a great-looking 3D game to try out.

Where to play
Jalapeno Racers