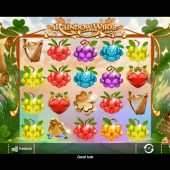 Rainbow Wilds slot from Iron Dog Studio is a an Irish-themed game in time for St Paddy’s Day. It has all the major stereotypes covered including leprechauns, pots of gold, rainbows, 4-leaf clovers and thats before we even get to the reels! Light and airy harp music accompanies as you play with dramatic lifts in tone to honour wins, no matter the size. So will this light-hearted Irish slot game leave us feeling lucky or simply lucked out?

We are presented with a 5x4 grid and 1024 ways to win in Rainbow Wilds. Top paying symbols on the reels are anything that is gold. So, 4 leaf clovers pay 8x for 5-of-a-kind 5OAK down to the bird paying 3x for 5OAK. Hearts, Harps and Pints of Ale are between 2.4 - 1x with all remaining picture symbols made up of low paying berries.

According to the payable, these are described as Free Tumbles, but I know them better as Tumbling or Cascading reels, made popular by IGT’s Da Vinci Diamonds and later by other slots like NetEnt’s Gonzo’s Quest. Tumbling Reels are when winning combinations disappear or explode and symbols above drop down, potentially forming new winning combinations.

With a name like Rainbow Wilds, you would expect the Wild symbol to be a key part of the game and it very much is. There is the standard Rainbow Wild, which will swap for all non-Wild symbols on reels 2, 3, 4 and 5. There is the sticky Wild on reel 3 only, which will only disappear if it is part of a winning combination or there are no more wins to be had in that spin. Last, but by no means least, is the Expanding Wilds, which can appear on reels 2, 3, 4 and 5. You will know when one has landed as the whole row will turn into a rainbow, with all 4 positions turning Wild.

Should you get 4 or more successive wins during a single spin with the Tumbling Reel effect, then you will activate the Free Spins feature. You will be rewarded with the following:

Each successive tumbling reel will add another 1x multiplier, so it can prove very rewarding should the feature go your way.

I will be brutally honest and say that Rainbow Wilds is on a bit of a hiding to nothing with me as I can’t stand Irish themed slots. There are a few exceptions, but this theme only encourages out of date stereotypes, sickly sweet graphics and mind-numbingly lilty music often described as Irish music. I am afraid that Rainbow Wilds is not a huge break away from this, offering much of the same. The game enjoys a pretty healthy 96% RTP and does have plenty of entertainment in the base game, but the theme suggests a deliberate target audience - which I am not a part of. I won’t be seeking out any pots of Gold around this slot anytime soon.