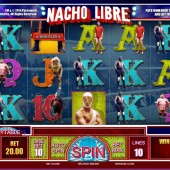 Nacho Libre was a 2006 movie flop starring Jack Black and directed by Jared Hess that has a plot line that appears hard to believe but is allegedly based on the true story of a Mexican Catholic priest called Rev. Sergio Gutierrez Benitez aka Fray Tormenta. The film tells the tale of a monk, played by Black, who is fed up of being mocked by everyone throughout his life and decides to wrestle as a masked competitor in the Mexican lucha libre.

This slot is a 5 reel, 10 payline title based on the movie thanks to slot developer iSoftBet's licensing deal with Paramount Pictures. Unfortunately, Black himself does not appear on the reels but a large number of the lucha libre wrestlers that had roles in the film make an appearance. It's a shame they couldn't even put Black on the reels as Nacho. I mean, nobody would have been able to see his face anyway!

The Symbols
The symbols on the reels consist of all the wrestlers from the film. There is Ramses, Sage, Rosales, Dynasty, and Esqueleto plus a range of minor characters that are located on the same positions as the regular 10-through-to-Ace symbols.

The Wild symbol is represented by the wrestling bell. It acts as a replacement for any of the other symbols across the reels, except for the Scatters, to complete any possible winning combinations that might appear on a single spin. In addition, any wins including a Wild symbol will provide a 2x multiplier.

That is not where the fun ends for Nacho Libre. There is also a jackpot that can be won. This can be triggered if you manage to hit the five main characters of Ramses, Sage, Rosales, Dynasty, and Esqueleto across the reels on the same spin. You can win up to 10,000 coins if you are successful in doing this.

Nacho Libre was a fairly poor movie but it has translated surprisingly well to the slots platform. The now tainted Hulkamania slot from Endemol Games and the quality NextGen Gaming slot Andre the Giant are both wrestling-themed titles that had a huge impact on the slots market but this is perhaps the best slot in that genre.