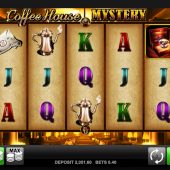 Coffee House Mystery slot is a Merkur Gaming title available online. It has an old fashioned look to it, with sharp-suited characters and symbols from a bygone era. The soundtrack sets the scene for a who-done-it fictional story, taking place at this high-end coffee house. So will this game give us a the hit we might be expecting or will we be left with a bitter after taste?

This 5 reel, 3 row slot has a total of 20 paylines, which is fairly typical for this developer. The top paying picture symbol in Coffee House Mystery is the pocket watch, paying 25x for 5-of-a-kind (5OAK). Other symbols such as the coffee pot, cup cake and the napkins pay between 5x - 15x for a 5OAK. Lower paying symbols are the typical A-K-Q-J symbols, offering more meager rewards.

A closer inspection of the reels will reveal some small figures placed in the corners and around the edge of the playing screen. These are characters from the Coffee House Mystery and they offer a range of different winning opportunities involving Wilds symbols. Each character offers something different:

Detective Dan - An expanding Wild will appear from one of the four corners of the reels, covering 2 x 2 reel positions.

Office John - Appears on reel 3 and will expand the cover the reel with an Expanding Wild.

Miss Lucy - Expanding Wilds appears in shape of a cross, covering 5 symbol positions. This will only appear on the first three or last three reels.

Espresso - Possibly the best of the lot, you get an expanding Wild covering 9 positions on the middle 3 reels. This particular feature can pay handsomely if the right symbols land on the outer reels.
Free spins feature

Land the bonus symbol on reels 1, 3 and 5 and you will trigger the free spins feature. You start with 10 free spins, but there is a possibility of re-triggering this feature an additional 2 times. During the free spins you will see two smaller sets of reels and if they have been opened up by the retrigger you could see 15 reels spinning one after another. All of the Mystery Wild features can be activated during the feature as well.

Coffee House Mystery slot has the look and feel of a land-based slot machine, as you might expect from Merkur. It’s soft brown and gold colour scheme and gentle soundtrack makes it very easy to play for longer sessions. What is probably most attractive about this slot is the 96.95% RTP, which is very impressive even for an online slot. Compared to other Merkur slots such as Pharao's Riches and Crystal Heart, this slot is definitely on the volatile side. Overall there is a nice balance of wins in the base game and the feature and if you can hit some of the big expanding Wilds then you could really enjoy your visit to this coffee house…

Amulet of the Pharaoh

Book of the Ages