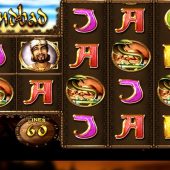 Sinbad slot is perhaps the best Merkur game for a long time but there is a twist to that statement as we'll discover in due course. HexenKessel wasn't bad, Knight's Life is hugely volatile as is Magic Mirror Deluxe so maybe we'll see a balance between the crazy volatility of those last two games and some decent base game play in the case of Sinbad. We play over a background of desert dunes and get some nice Middle Eastern style music as we spin with the reels seemingly made of brown carpet. Now that troubles me slightly as carpets were more relevant to Aladdin as opposed to Sinbad, so is our bankroll heading for a long flight away here?

On The Reels...
You may get what I was referring to when mentioning a twist to Sinbad slot above, right now in fact. If I tell you it has 60 paying lines over 5 reels, consisting of a 2x2 block of 4 single-tile reels and then 3 reels of 4 rows each, then you'll likely guess what game Merkur have, ahem! made a tribute to!

Yes, it's a virtual copy of WMS' Bruce Lee slot right down to the pays and 30-coin stake.

Symbols can appear stacked on the bigger reels including Wilds and the 5-of-a-kind pays are 400 coins for the Ship, 200 for Sinbad or the Woman, 150 for Cobra or Eagle, 100 for Minarets or Oasis with 4 card values all paying 40 for a full line. Wilds pay the same as the top-paying icon. There aren't any random features but you do have 3 possible free games bonuses, of which one is very desirable.

Free Games
Symbols are everything in Sinbad and the key ones are as follows:

Frozen Symbols - should you land 4 identical symbols on the 2x2 block of individual reels including any Wilds, then 5 free games occur with them held in position. The reels will only display Wilds or matching symbols.

Wild Symbols - if you see 3 Anchors on reels 3, 4 and 5 then 5 free spins are awarded. You are guaranteed one of reels 3, 4 or 5 to be Wild each spin and the other two will display at least one Wild as well. You can actually trigger these two features while the other one is playing its free spins.

Combined Free Spins - should you get a very rare simultaneous trigger of both the Frozen and Wild free spins as above, you will be awarded 20 spins with the 4 matching symbols on the left locked and the Wilds guaranteed. If the 4 locked symbols on the left are high, or have a Wild way through then you should be looking at over 1000x bet. You can't get retriggers here as obviously the locked reels and a fixed Wild reel prevent this.

Our View...
Sinbad slot is a shameless copy of WMS' Bruce Lee as stated but developers all seem intent on doing this for classic mechanics lately, with numerous versions of Starburst, Buffalo and Book of Ra Deluxe out there already. This fact aside, it's not quite got the graphics appeal of Bruce Lee but you cannot criticise what has proven to be a popular and enduring game model from the days WMS used to produce original and fun slots with big-win potential. The RTP here is slightly higher at 96.05% as well and of course you don't get the classic WMS 'gimped' reels which spin in a certain way when any feature is going to drop in. I won't mind embarking on another voyage with Sinbad though...

Amulet of the Pharaoh

Book of the Ages