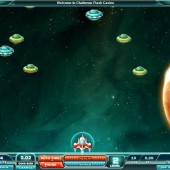 Slots developer Microgaming has started to put its stamp on a number of big name slots such as the thrilling Terminator 2 slot and the epic dinosaur-themed Jurassic Park slot. Add to this the impending, at time of writing, release of the Game of Thrones slot. Things are looking very positive for the developer right now.

Scattered in between these big name and big budget releases are their run-of-the-mill slots releases and one of those is the interesting Max Damage and the Alien Attack slot. Seemingly taking its inspiration from the Space Invaders video game that graced the majority of households in the 1980s, Microgaming attempts to bring old skool gaming into the online slots mainstream.

Max Damage and the Alien Attack is a slot that does not set up as your stereotypical slot. There are no reels as such and no paylines that you would commonly recognise. A wager is placed when an alien ship explodes and it does not cost you any money to fire ammunition at the alien ships. You must decide your coin value before you begin playing adding a level of uncertainty and higher risk to proceedings.

Yes, it might appear that this is more an arcade game than a slot but Microgaming has released it under the label of an online slot and essentially if you see that every destroyed alien ship costs you 10 coins then you could say that every alien ship destroyed equates to one spin on a standard slot. Destroying a ship might cost 10 coins but it also offers the risk of a reward. You can win up to 25x your wager that you determined before you began playing or it could reward you with nothing. You can see the similarities with playing on a standard slot now can't you! This does add confusion to the game because one minute you could be 25x your wager up and then having destroyed a number of alien ships find yourself down on your money again.

The game then sets up like a classic arcade game where by you can control the movement of your war ship by using the left and right cursor buttons whilst being able to fire ammunition using the space bar. Those of you that loved playing on the Commodore 64 or Spectrum will no doubt be frothing at the mouth right now.

This is not just a trigger happy game where unleashing hell on the alien ships is the be all and end all. There is an element of self preservation required. If an alien ship manages to avoid your shots and sneaks past you then you will lose one of your six lives. It is possible to collect boosters as you play and these include symbols such as an extra life, more health, a bonus shield, and a damage booster to increase the damage you can inflict on the alien ships. You can also collect weapon upgrades to boost your armoury. The structure of this slot is that you must complete nine different levels and each level is complete once you have destroyed all the alien ships possible without losing all of your lives and seeing the fateful “Game Over!” sign appear.

When I heard Microgaming were releasing Max Damage and the Alien Attack I was genuinely excited. I saw that they were planning on blending 1980s computer gaming with an online slots format and I was excited. I thought we were in for the evolutionary next step after Play'n Go's awesome Space Race slot or NetEnt's slightly wackier Space Wars slot. Unfortunately, that was not to be. Instead we have a slot that can barely be deemed a slot. The action is fun but after the novelty wears off you will feel it is slightly pointless. The success rate of destroying alien ships has zero relevance to earning big wins so you could destroy a fleet of alien ships and lose a lot of money. Even when you win, the wins are not massive. I'm sorry Microgaming but this is a big fat dud for me. The sooner Game of Thrones gets here the better!