Rabbit in the Hat slot

Free Rabbit in the Hat slot

Play Rabbit in the Hat now

Rabbit in the Hat slot review 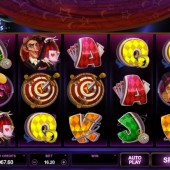 Magic has historically always been a popular type of entertainment. So it makes perfect sense for one of the biggest slots developers, in the form of Microgaming, launch a slot with a theme based on magic. They might not be the first developer to approach the topic of magic in their slots but that isn't a reason to get less excited.

Rabbit in the Hat is a 5 reel, 9 payline slot that focuses on a cheesy magician, donned in top hat and tails, who produces rabbits from hats to try and help you win some decent-sized payouts with winning combinations across the reels.

Symbols across the reels consist of the magician himself, his cute, blonde, and buxom assistant, a white rabbit, a treasure chest, daggers on a dagger board, a locked water chest, and the regular 9-through-to-Ace symbols.

Wild in the Hat!

The Wild symbol is represented by the icon displaying the word “Wild” coming out of a magician's hat. This symbol substitutes for all other symbols on the reels to help you complete any possible winning combinations that might appear on a single spin.

Watch Out for the Magic Hats!

This slot comes with a couple of neat little features. The first is the Magic Hats Bonus. There are four different hats that can appear above the five reels on any spin. These include a Wild Reel hat that can turn up to three reels completely Wild, the Free Spins hat that can trigger 10 free spins, the Cash hat that can award a random cash bonus, and the Mystery Prize hat that randomly awards a bonus prize. These hats and their bonus rewards are triggered if a Wild symbol appears on a reel below one of these hats that appear above the reels. The rabbit from the hat at the top of the reel will then jump down into the Wild hat and award the prize.

Conjur up to 50 Free Spins
The second feature on this slot is the Free Spins Bonus. This is triggered as one of the Magic Hats Bonus prizes and you can trigger up to 50 free spins. This would happen if five Free Spins hats appeared above the five reels and five Wilds appeared across all five reels. The free spins will begin with a magic hat appearing over each of the five reels. On every free spin, a random prize magic hat will appear above the fifth reel creating a new opportunity to win a different prize on each free spin. The free spins can be re-triggered with up to 10 extra free spins added. It is also possible to win up to 90,000 coins on the free spins.

It can be a tough game to get used to. I found this and I've been playing slots for years. However, it was nice to play a Microgaming title and not be bored. The magic hats appearing above the reels will keep you locked on the action and the free spins is pure carnage. If more Microgaming slots were released like this then the developer might not suffer such a harsh reception from its critics. The great thing about magic is that it is everywhere. If you find you want more magic in your life after playing this slot then check out the Sheer Magic slot from Ainsworth or the slick NetEnt slots title Magic Portals. Personally I would opt for another bunny-based slot, with Big Time Gaming's White Rabbit slot, offering something much more entertaining.