So Many Monsters slot

So Many Monsters slot review 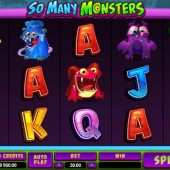 Released as part of a triple threat along with the fish-themed So Much Sushi and the “same shit, different name” title of So Much Candy, So Many Monsters is another 5 reel, 25 pay-line slot that has me wondering whether or not the brains at prestigious online slot developer Microgaming were getting high on drugs when they came up with these slots.

Imagine you're the chief executive of an online slots developer and your creative team comes to you just weeks after you've released the big slot hit of the summer in the form of the mind-blowing Jurassic Park. An email comes through. You read the heading of “New Slots Ideas” and you're excited. However, you open up the email to see the content of some crazy babble and ludicrous suggestions. Even more staggering is that you then commission these slots to be released. Then even more unbelievably, they actually turn out to be fairly decent slots!

So Many or So Much?

So Many Monsters (well, So Much Monsters just sounds wrong!) continues down the right path that So Much Sushi and So Much Candy did. The reels are full of color with various monsters representing symbols. There is a blue monster, a purple monster, a yellow monster, a red monster, and a green monster. There are also the regular 10-through-to-Ace symbols that fill up the reels.

You Can Trigger Split Monster Symbols

So Many Monsters are Wild!

The Wild symbol is represented by the So Many Monsters logo icon and this substitutes for all other symbols, except for the monster's eye Scatters, to complete winning combinations and help you to win more pay outs.

The monster's eye Scatters are the key to triggering the free spins bonus round. If you manage to hit three or more of these symbols across the reels then you will be given the chance to pick one of five free spins offers with up to 16 free spins up for grabs. However, if you opt to choose a less number of free spins then the multiplier value will increase so it's not necessarily a case of more free spins meaning a larger win. The free spins can also be re-triggered which is always nice to see.

So Many Monsters was part of a triple release from Microgaming and it is basically the same slot as So Much Sushi and So Much Candy except with monsters replacing sushi and candy. I'm still confused as to why Microgaming released three slots that were so similar but I've enjoyed playing all three so I'm not complaining. All three slots do hold a resemblance in gameplay the flowery-themed In Bloom slot from IGT so it's worth checking that slot out if you had fun playing this.