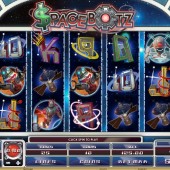 “Spaceman, I just want to go into space, man,” warbled chart-bothering one-hit wonders, Babylon Zoo back in the ‘90s.

And it’s not just ropey indie bands who want to go into space; slots developers have been tinkering with the theme for years.

Really, it’s no wonder, as there’s plenty of scope for interplanetary tomfoolery – aliens, rockets, planets, the solar system really is the oyster of the slots designer.

As the title of online slot developer Microgaming’s cracking sci-fi-tinged slot, SpaceBotz, suggests, this game centers around a gaggle of wacky robots in some distant cosmos. On the reels are rocket robots, ancient looking droids, futuristic drones, satellites and the familiar 10-through-Ace symbols that animate whenever you hit a winning combo. In feel it looks like a poster for a classic ‘60s sci-fi TV series like Lost in Space – the top paying robot certainly looks like it’s been lifted from a Hollywood movie.

Look out for the game’s obvious Wild symbol, which substitutes for all symbols on the reels other than the game’s Scatter logo. Three or more of those game logos will trigger 5 free spins. Not only that, but during the spins every robot turns Wild. Hit enough robots during the spins, therefore, and you could be in for some mammoth wins.

That’s about it for your bonus features in SpaceBotz, unfortunately. Free spins fans will love it, of course, with the added bonus it has of extra Wilds. However, for more generous bonus rounds, you may want to look elsewhere, and luckily there are plenty of options available. Sheriff Gaming’s fun robot-sitcom, The Robets, is a great option for its attention to detail and features, and for sheer wackiness, try NetEnt’s space-age Starburst.