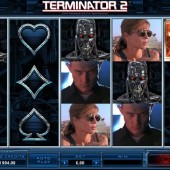 In what has been one of arguably the most hotly anticipated slot releases of all time, slot developer Microgaming have finally launched this thrilling new Terminator 2 slot onto the online slots market. God, I can feel the exhale of suspense as I write this!

Terminator 2 is based on the iconic 1991 hit movie sequel to the 1984 original. It was directed by James Cameron and starred Arnold Schwarzenegger, Linda Hamilton, Edward Furlong and Robert Patrick. The movie revolves around a time traveling cyborg assassin that is given a mission to travel back in time to kill an army leader called John Connor, played by Furlong.

The movie is widely regarded as one of the greatest films of all time and thus the hype surrounding this slot release, particularly after the success of NetEnt’s outstanding Aliens slot, was incredible.

This 5 reel, 243 ways to win slot includes all the movie’s main characters such as John Connor, Sarah Connor, the T-800 and the T-1000. The T2 Logo acts as the Wild and substitutes for all other symbols, except for the Scatters, to complete winning combinations.

The Scatters are represented by the symbol that shows the Terminator time traveling. If you hit three or more of these symbols across the reels then you will trigger the free spins bonus round. You will be instantly awarded 10 free spins. Unfortunately, the free spins cannot be re-triggered.

However, during the free spins bonus round there is a lot to keep an eye on. Firstly, an additional row of symbols is added to the reels so that the 243 ways to win is turned into 1,024 ways to win. In addition to this, the T-1000 symbol can transform into any other symbol to complete winning combinations and deliver more pay outs.

I have to admit, considering the movie was such a high-octane experience, this slot did appear to flatter to deceive. The music is pretty cool and the reels are dark in tone but that’s where the thrill ride ends really. I was expecting it to be a bit more frantic. Still, it’s not a bad slot. Was it worth the hype? Probably not. It’s nowhere near the standard of Microgaming’s hugely popular The Dark Knight slot and I think that’s why I feel a bit let down. Nonetheless, you should still get enjoyment from playing this. It’s alright but not as good as it should be.