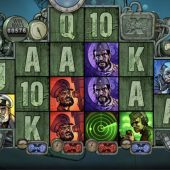 Das xBoot slot by NoLimit City is another which aggregates their various 'x' formulas, in this case xWays, xBomb and xNudge. So like Mental slot we get 3 of their 4 features in one game, elements of Fire in the Hole xBomb slot combined with the seemingly less popular El Paso Gunfight xNudge slot. Here our theme is the tragic WWII story of a German U-Boat (U-96) which was the subject for a classic German Film called Das Boot (The Boat) and we have artistic representations of the main characters and the reels set over an underwater scene of the submerged diving vessel and sound effects you would expect. NLC have changed the story here perhaps to avoid controversy and instead of sinking merchant ships our crew here are trying to locate a lost submarine packed with looted gold while being hunted by the enemy. So will our bankroll dive fast into the depths or can we bring back some bullion here?

On the reels...
Single and stacked symbols can land on our 6 reels here on Das xBoot slot which initially has reels of 2-3-4-4-3-2 rows and 576-ways. Fully expanded via the xWays symbols etc. they can reach up to 75712-ways but that's more likely later. You have two groups of symbols, the 5 crew of which the Captain is top pay 5x bet for 6-of-a-kind and 5 card values down to 0.25x. Sonar scatters appear only on the centre 4 reels.
x-Symbols
You can get single x Bomb Wilds but mostly they tend to appear via the xNudge Wild symbol which can land on the two 4-row reels 3 and 4. When it does, it nudges to fill the whole reel and each nudge it takes to do that will add 1x to its multiplier, if both appear the multipliers are added. The xWays symbol appear on reels 2 and 5 and will expand to award 2 or 3 symbols the same, if both land these symbols will also be the same. The xBomb Wild is our last special which explodes all non-winning symbols apart from Wilds and scatters with replacements cascading from above and adds 1x to the multiplier for that win, and again if another collapse occurs and so-on.

Free games
There are two types as we expect from NoLimit City by now:
Silent Hunter Spins - 3 scatters trigger 8 spins and reel 3 now grows to 8-rows high and you get a torpedo launch sequence animation in play. You can now land a Periscope Wild on that reel and when it does, if your torpedo hits the target then the Wild will fill the reel to the top and then nudge down to the bottom, adding a 1x multiplier for each step. This multiplier is sticky and carries over for the rest of the spins, as do any xBomb multipliers you get. You get +2 spins for any scatter seen in the round, but no upgrades to Wolf Pack spins.
Wolf Pack Spins - you need all 4 scatters for 8 of these. A torpedo tube appears under the reels 2-5 and torpedo Wilds or Parts can now land on these reels. You need to fill these Torpedos up with all their parts to activate them. On 2 and 5 the Torpedo Wild adds a +1 xWays symbol to the torpedo area. Torpedo Part symbols always award +2 xWays Wild symbol. Complete any Torpedo and it's launched, a maximum of 9 xWays on each can be accrued beforehand. On 2 and 5 you get a standard pay symbol when launched, on 3 and 4 it wil be Wilds. Any launched Torpedo adds a sticky 1x to the round multiplier as do any xBombs landing. If an xBomb lands at the same time as a torpedo part it will increase the xWays addition to the torpedo with +1. Any scatter landing adds +2 spins.
This is a very volatile game and your maximum pay is 55,200x bet here - if you get this, the round stops and you are treated to an animated sequence called 'Das Gold Des Roter Teufel' or The Red Devil's Gold! The feature contains 36.30% of your RTP and the base game 59.75% so given the feature is triggered on average every 211 spins, you get the idea here.

Our View...
Das xBoot slot has a 96.05% RTP but can be 94.02% at some casinos, so always check! The game looks the part, sounds brilliant and has the usual gold standard NoLimit City animation sequences. It's far easier to understand than the complex and hard to follow Mental slot bonus but due to the RTP split you do need the bonus regularly here. In some jurisdictions the features can be purchased for 75 and 350x respectively and you can play for 0.20 to 100.00 (if you have a huge budget!) The base game has great sound effects and does drop the occasional big win in, although bear in mind with an overall hit frequency of 22% you get 4 dead spins out of every 5 on average; as I said, it's very volatile. You have a 1/65million chance of the top prize so prepare for your bankroll drowning if you try and seek out the Red Devil's Gold here...