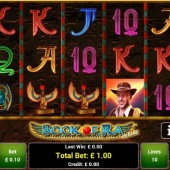 There are not many mobile slots out there that can help to define the reputation of a developer. However, Book of Ra Deluxe is one of those mobile slots and fans of the series will be delighted that it has been released on the mobile platform.

On the Reels...
Book of Ra Deluxe is a 5 reel, 10 payline mobile slot from European slots developer Novomatic that has an Egyptian theme. Players can find a range of symbols on the reels that hold a resemblance to icons you might associate with Indiana Jones but we can assure that no copyright terms have been infringed during the making of this slot.

The Symbols
Symbols on the reels include the treasure hunter aka the Indiana Jones lookalike, a Pharaoh statue, an Egyptian winged Goddess statue, and a Scarab, plus the regular 10-through-to-Ace symbols that you would expect to see.

Win 10 Free Spins with a 2x Multiplier
You will need to hit three or more of the Book of Ra symbols across the reels to trigger the free spins bonus round. You will receive 10 free spins once triggered with a 2x multiplier added to any wins you hit during the free spins.

Our View...
Book of Ra Deluxe has long been considered one of the most iconic slots around so I am thrilled that it has been launched on the mobile platform. It has far more appeal than a couple of other Novomatic mobile slots such as the bland Plenty on Twenty and the mediocre Sizzling Hot Deluxe and will continue to be a hit with slots players for its simplicity and potentially large pay outs.

Secret of the Stones Max