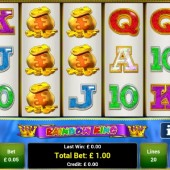 As one of the most popular slots developers in Europe, Novomatic have garnered a reputation for producing mobile slots that are simple to play yet do not lose too much of their entertainment value at the same time. Mobile slots titles such as the Egyptian-themed Book of Ra Deluxe and the colourful Lucky Lady's Charm Deluxe are just two shining examples of this.

On the Reels...
Rainbow King is a 5 reel, 20 payline mobile slot that is the sequel title to the popular Reel King mobile slot. The theme is all about royalty and once again the said king appears in his all too freaky manner. Seriously, I'm still having nightmares about him now.

The Symbols
Symbols across the reels consist of a the jovial king himself, castle, crown jewels, a pile of gold, and the regular 10-through-to-Ace icons. The symbols appear on a set of reels that are put against a backdrop of countryside with a rainbow appearing over head.

Trigger One of Three Bonus Features
There are three bonus features to be triggered on this mobile slot and you will need to hit three or more of the three separate Scatters that appear on the reels. The Scatters come in the form of the king, crown, and castle symbols.

Find the Crown to Win Big
Finally, there is the King Cash Bonus. You can trigger this bonus feature by hitting three or more crown Scatters on the reels. These Scatters will only appear on reels 2, 3, and 4. This is another Pick'em Bonus-style feature where you must select one of the 12 crowns on offer to reveal your prize. Once again, you can trigger up to 500x your bet.

Our View...
Rainbow King is a slightly more in-depth game than some other Novomatic mobile slots. I certainly found it more entertaining than the aquatic-themed Lord of the Ocean and it certainly feels like a step higher up the evolutionary chain than Reel King. Funnily enough, I was never a massive fan of the Reel King mobile slot so I found Rainbow King refreshing and it has certainly won me over... even if I am still petrified by the king character on the reels! No amount of money he gives me will make me like him!