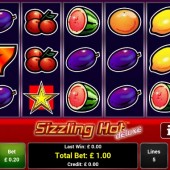 For decades now, European-facing slots developer Novomatic has won critical acclaim for its array of titles both land-based and online. That trend appears to be continuing with the developer venturing into the mobile slots market. Popular titles such as the Indiana Jones-esque Book of Ra Deluxe and the brilliant Reel King have set the tone so fans of Novomatic's slots can prepare to enjoy their favourite games on the move.

On the Reels...
One of those mobile slots is Sizzling Hot Deluxe. This mobile slot is a 5 reel, 5 payline title that adopts a classic slots theme that has also been seen in other Novomatic mobile slots including the disappointing Plenty on Twenty.

The Symbols
Symbols on Sizzling Hot Deluxe consist of those that you would expect to find on a vintage land-based slot machine in your run-of-the-mill Reno casino. Novomatic have tapped into that old school feel and dragged it into the mobile genre. There are watermelons, grapes, cherries, oranges, and lemons on the reels.

Earn 200x Your Total Bet with Number 7
The top paying symbol is the number 7 icon. If you manage to hit five of these symbols across the reels then you will win a jackpot of 200x your total bet. That is certainly a potential reward not to be ignored.

Win Scatter Pays with the Stars
The star symbol acts as a kind of Scatter. It pays at any position on the reels so you will want to keep an eye out for the stars because you could find yourself picking up some Scatter pay outs in the least likely of situations.

Our View...
Sizzling Hot Deluxe is almost a carbon copy of Plenty on Twenty mobile slot but I simply found the wins easier to come by on this game. I am still waking up in a cold sweat after my Plenty on Twenty experiences so when I began to play this mobile slot I had my reservations but it seems this game has avoided the tightness issue of Plenty of Twenty. It's still not one of the most enjoyable Novomatic mobile slots but it is certainly not one I would actively advise against playing.