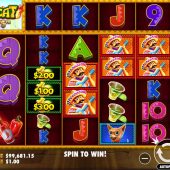 Chill Heat Megaways slot by Pragmatic Play is pretty unremarkable, using an old template and common bonus round. Like Big Time Gaming's classic Megaways Extra Chilli slot you have Mexican symbols, frantic music of the region twanging away and the same street market scene behind the reels. So can we add some heat to our bankroll here or will we leave with a decidedly chilly feeling inside?

On the reels...
You get 6 reels here with a top scroll of 4 symbols over the centre and 2-7 rows underneath which results in 324-200704 ways per spin on Chill Heat Megaways slot. Symbols appear stacked and singly with winning ones replaced by tumbles from above. The Logo Wild appears both on the top scroll and also reels 2-5 underneath with the Mexican Guitarist top 6-of-a-kind pay at 10x your 20-coin bet. The Chihuahua is 6.25x, Chilli Sauce 3.75x, Tequila 1.5x with six card values of 1.5 down to 0.6x. The Cash Sacks are scatters and can appear stacked, only on the middle 4 reels and we have no modifiers so straight on to the bonus.

Money Re-spins
Land 6+ Cash Sacks and you get a re-spins round. The ways in play remain the same as the spin triggering it so you have a round quite like that of iSoftBet's Aztec Gold Megaways slot. You get the cash frozen in place while the other positions re-spin and have 3 lives which are reset each time a value lands or a special symbol on the top scroll above columns 2-5. These are:
Padlock Leaning Left - unlocks reel 1 which has the amount of rows it had on the triggering spin.
Padlock Leaning Right - same as above but unlocks reel 6.
Up-Down Arrow - extends the reel under it to maximum 7 rows.
Down Arrow Round - collects all cash values below it and adds them to total.
Down Arrow Square - collects all cash values in view on whole grid and adds them to total.
X Symbol Round - multiplies all values in column under it by 2,3,5 or 10x.
X Symbol Square - same as above but for the whole grid.
You are capped at 5,000x bet for the bonus and in reality it's a version of the bonus round of Relax Gaming's Money Train 2 slot.

Our view...
With a pretty poor base game Chill Heat Megaways slot relies heavily on the bonus for any action. In some countries you can buy this for 100x stake and anywhere you can play an Ante-Bet stake of 25% higher to double the chances of seeing a feature. The sounds, graphics and animations are average at best and we have seen all this before from both Pragmatic Play if not other developers. Why would you play this when other similar games have no win cap or a far higher one? Sorry, but these chillies just aren't hot enough for my taste...