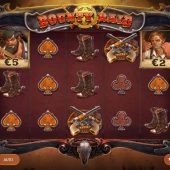 Bounty Raid slot by Red Tiger takes us to the badlands of the Wild West which of late seems a favourite theme amongst the developers. This game alludes to their own Wild Wild Chest slot and certainly doesn't have the big-win potential that Netent's infamous Dead or Alive 2 does, more like that of Wild Rails slot by Play'n Go. Here we have ghostly cowboys riding at night as the background artwork and sculpted reels for our buxom main bounty hunter character to land on, with the thematic music you'd expect from the subject. So how much bounty will be added to our bankroll if we round up some of the errant cowboys around here?

On The Reels...
We have 5 reels of 3 rows and 10 pay lines here on Bounty Raid slot, with symbols stacked and single. There are no Wilds and only one real scatter here but that doesn't mean there's no action around this dusty old town. the 5-of-a-kinds pays 8x bet Coin Chest, 6x Pistols, 5x Saddle, 4x Stetson, 3x Boots and finally four card suits of 2.5 down to 1x for a full line. We do have two features to see though which is where the 5 other symbols of the law breakers come into consideration..

Bounty Hunter
Our chesty shotgun-wielding lady can appear on reel 3 and is 2-rows high usually. Once she does, she sticks in place along with any wanted characters of which there are 5, one on each reel. These always display a cash value of minimum 1x bet and the maxima for them are 3x, 10x, 20x, 35x and 50x respectively. You get whichever values are present when she lands, these are then jailed and the rest of the tiles re-spin as she fires both barrels into the air. If any more wanted characters land, these too are jailed and you collect their cash rewards. You may also see a Golden Badge land and this will add values to all the wanted men captured thus far. You only get one chance, so the first re-spin to not add a wanted man or Gold Badge end the bonus and you collect.

Sheriff
He can appear on any reel bar the middle where the Bounty Hunter can land. When he does, any wanted men in view will give you their cash values. The wanted men, Bounty Hunter and Sheriff have no line pays themselves, only the wanted men's values when either of the features occurs.

Our View...
Bounty Raid slot is quite entertaining as it's low in volatility with a maximum win of around 1000x bet. The RTP is reasonable at 95.71% and as you saw, the symbol pays are low so it's all down to how often you trigger the features, especially the Bounty Hunter which is the only one that you can realistically expect over 100x on. It's average for effects, graphics and sounds and won't become tiresome too quickly as a result. If you like your one-horse towns to be fairly benign, then this slot is for you...