Clash of The Beasts slot

Clash of The Beasts slot review 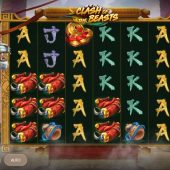 Clash of The Beasts slot by Red Tiger is yet another battle-themed game. These are often warring rivals as with 4ThePlayer's 2 Gods slot which features Zeus and Thor, or Playtech's Batman vs Superman game. Here we get an oriental feel with dragons each side of the reels in a Chinese gilded surround along with the stereotypical music these themes invariably use. The game looks made for the far eastern market with may pays in multiples of 8, the Chinese lucky number but can these beast add to our bankrolls here in the West too?

There are 6 reels here of 5 rows each with 40 pay lines and stacked symbols which can fill whole columns on Clash of The Beasts slot. The 6-of-a-kind pays are rather imprecise due them ending in 8 but are approximately 22x Ying Yang Wilds, 10x Tokens, 7x Horns, 4.5x Bamboo, 3x Pot with five card values of 1.75 down to 0.5x for a line of 6. You have no modifiers but there are some interesting bonuses available here.

You need two scatters to trigger them. Tiger scatters appear on the first 3 reels, Dragon scatters on the last 3. You can land each of these pairs, or a mixed pair for three different bonuses.
Tiger Spins - 2 scatters awards 10, all 3 awards 15. You get the random Tiger modifier active during them. When his outline appears on the grid, he will swap symbols for a guaranteed win.
Dragon Spins - 2 scatters awards 10, all 3 awards 15. The random Dragon modifier is active during them. When his outline appears on the reels, he will nudge rows across and then the reels up and down for bigger wins.
Clash Spins - you get 10 spins for one Tiger and one Dragon scatter, and 5 extra spins for any other scatter appearing on the triggering spin, so 30 maximum. During these both modifiers are in action and can occur individually or together. If they occur together, you will see many random Wilds added after the two modifiers have occurred and should get some big wins. This is the bonus you really want to get of the three.

Clash of The Beasts slot is actually a very good game although it only has a max pay of about 1860x, with a 95.73% RTP. You have decent enough graphics and sounds with really good animations when the features are in play too. The base game rarely pays that much so you are dependent on frequent bonus triggering for the best wins. Get 15 or more Clash Spins and you should be in for a few hundred times bet as these tend to pay really well on average. The Tiger or Dragon spins on their own aren't too bad but you will be counting winnings in tens, not hundreds. These beasts make some loud noises, but don't bite too hard...