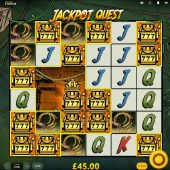 Jackpot Quest slot by Red Tiger hits us instantly with a DC Comics-style cartoon adventure theme and the impression we are playing a cluster pay or grid slot, but we are not! A young adventurer is trapped in the perils of a creepy jungle and abandoned ruins where our reels lie and we are treated to some matching musical and sound effects when we spin or stop those reels. The symbols are in the style of Netent's Jack Hammer slot combined with Yggdrasil's Jungle Books background and if you throw Thunderkick's Jaguar Temple game into the mix you can see all the elements of Jackpot Quest. Despite the title there are no jackpots here, so how will our bankroll gain from this quest into the darkness?

As said above, you could be forgiven for expecting cluster pays as you see a large grid, but Jackpot Quest slot simply has 6 reels or 6 rows each with 40 fixed pay lines and stacked symbols. Your 6-of-a-kind pays are Slot 25x, Satchel 15x, Whip 12x, Map 8x and five card values of 2 down to 0.8x your total bet. Wilds don't appear but Ruby Talismans can although they don't trigger a conventional bonus because we don't get one, rather a whole series of in-play modifiers.

You need to see one or more Ruby Talisman in conjunction with a symbol win to initiate symbol modifiers.

In all cases above, whether those picture symbol wins arose from a natural win or Talsiman creations, the winning symbols remain in place while the other postions respin until no further winning tiles are added. When 4 winning picture symbols appear in a 2x2 square, the symbol becomes super symbol and of course you can get to 3x3 up until a full screen of 6x6. Red Tiger tell us we can win up to 1000x bet on Jackpot Quest, so the volatility isn't too high here.

Jackpot Quest slot is a fast playing entertaining game which doesn't result in any negativity due to the lack of a dedicated free games bonus, as there's always something going on here. The theme is alright, graphics and animations quite good and the sounds don't get tiresome which is always a boon to the enjoyment of any slot. We have a RTP of 96.30% and you will likely see a good long session for your money here although wins of the 100x plus range aren't common, but don't worry as you can get runs of middling wins to rack up a decent raise if you're lucky. Not one of the best slots ever but there's no particular reason to avoid the game in your quest for entertainment...