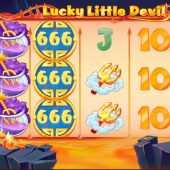 Lucky Little Devil slot had me groaning as soon as I opened it up, as I could immediately see it was yet another formulaic Red Tiger offering with the same old stacked reels and random in-play features described on the opening screen, bar one which could be very rewarding. That said, their mechanic has proven quite popular and although each game tends to be a different combination of the 'same-old' some can work well. Lucky Little Devil is cobbled together from other Red Tiger 10-liners, namely Dragon's Luck and the dire Mega Jade game. We see a juvenile 'Red Devil' character and the slot sits over the gates to what appears to be an equally childish representation of a fiery hell. You hear a simple sound effect as you start the game and some ridiculously jolly and jaunty music that contradicts the theme as the reels spin. So will Little Devil do you a little favour or will he cast your bankroll into the furnace of hell?

As mentioned there are 10 pay lines and like Mega Jade you get adjacent pays which means 3 or more consecutive symbols pays anywhere on that pay line. The icons are stacked and due to the limited lines we get some decent pays for any 5-of-a-kind wins, the best being the 666 icon at 138x stake, with the cauldron at 40x, the snare at 30x and the final picture symbol is the pitchfork at 25x for the full line. The 5 card values pay 20 down to 10 for the 5 and naturally we have the usual Red Tiger in-play random events. First though, we get to the see the Golden Mystery stacks which whenever appearing will transform into any other symbol aside from the red Devil scatters or a Wild, as we don't get any Wilds. This transformation may or may not benefit you depending on which other symbols are on the reels after the spin.

The Red Devil may leap into action during any spin and award you one of these benefits:

He can make sure you win with his 'Little Helping Hand' by changing symbols and this can include making his own likeness appear on reels 1, 3 and 5 to trigger the free games.

If appearing during the free games he can add more 'Fiendish Free Spins' to your total.

He may award a shower of 'Little Devil Coins' which are basically more random mystery symbols to transform into another one, usually awarding a win when they do.

Lastly 'The Devil's Work' is rare but the one you want to see as the whole grid becomes on large Mystery Symbol thus guaranteeing you 10x 5-of-a-kind wins so this would be at least 100x bet and if the 666 the game's jackpot of 1380x stake!

The Devil himself may award you these as described above but if he doesn't you can always get the spins naturally by Red Devil scatters on the odd reels. You can't retrigger them but your enhancement is a block 3x3 Mystery Symbol which appears on the reels and due to the adjacent pays guarantees a win if appearing in part or fully. As said the Devil may award extra spins and the other random events occur more frequently in these games.

Lucky Little Devil isn't great graphics wise and as stated in the introduction is a rehash of different games. It's also quite volatile despite the 95.73% RTP and long strings of spins often occur with minimal wins. The Mystery Symbols seldom turn into anything other than low value icons and the random features don't seem as frequent as they are on other Red Tiger slots. Free spins are quite hard to trigger in either manner possible but at least they usually pay well. The game appears to be centred around the 'Devil's Work' random feature which always pays a high amount, but don't expect to see it unless very fortunate! I think this Little Devil is only lucky through us being very unlucky...