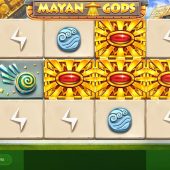 Mayan Gods slot is Red Tiger's first dedicated cascade game made in the style of slots such as Netent's Gonzo's Quest and Elements. As well as the symbology you would expect with the Mayan theme and gentle native music, for some inexplicable reason a UFO appears later too - all very Erich Von Daniken! The reels are quite plain and lie over a backdrop of fallen temple arches and as usual we hear the distinctive springy sound when we start and stop the game, the same which you'll notice on various Cayetano games too. For now the mysterious UFO is absent, but will our bankroll disappear into space with it?

There are 15 separate tiles on our 5x3 grid and 20 paying lines so the layout is the same as for most slots games. These cascade down from above and any winning tiles are removed before more drop in to replace them. The pays are quite decent suggesting a volatile game with some not insignificant potential. We pay 20 coins to play and the Wilds and Sun Discs both pay 25x bet (500 coins) for a full line of 5, the Quetzal (bird) 72 coins, Pyramid 56 and Spiral 40 with 5 lower-paying stone shapes awarding 24 down to 8 coins for all 5.

There is a reason for these rather odd amounts and that is we get an unlimited increasing multiplier for each successive win on any spin. Red Tiger are renowned for packing several in-play events into many of their slots (see Rainbow Jackpots for example) and here is no different which is perhaps fortunate as there is no dedicated bonus round.

As the title suggests this game is all about Mayan Gods and randomly they may appear on the reels in a 2x2 big symbol format. There are four of them and they can benefit your spin as follows:

Shaman - awards a multiplier increase and clears the grid for fresh symbols.

Mayan UFO - yes, that's why it's here! It will remove all low-paying tiles and replace them with higher ones.

Mayan Eclipse - turns itself and random other tiles into another symbol.

Mayan King - turns into a 2x2 Wild and may turn other random tiles into Wilds too.

Mayan Gods is a slot with limited potential but nevertheless is quite entertaining to watch with decent graphics and effects. This however only applies when the random 2x2 symbols are occurring with any degree of regularity otherwise the game quickly becomes rather tedious even allowing for the increasing multiplier which invariably only ever gets up to 3 or 4x on poor 3 or 4-of-a-kind tiles. The volatility is on the low side of medium but sometimes it may feel like you're playing a high-variance game if the base game is not performing. The RTP is a reasonable 96.11% but I feel Mayan Gods is seriously missing a dedicated free games bonus and is lacking in interest as a result. Sorry, they'll be absolutely no offerings to these Gods made by me again...