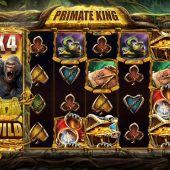 Primate King slot by Red Tiger is one of those games that made me groan with frustration the moment I saw it. I got the immediate feeling I had seen it all before. Not so much the theme, a jungle background and frenetic tribal music along with explorer-style symbols. It's in the same category as their Lord of the Wilds slot and might turn out to be the same at this stage, but at least like iSoftBet's Wild Ape slot and Netent's Gorilla Kingdom slot, it isn't a childish cartoon representation. So can we land some chest-thumping wins for our bankroll here or will it make a monkey of us?

Stacked symbols make up the 5 reels (6 reels later) of 4 rows here with 30 pay lines on Primate King slot, with no scatters as the features are progressive here. Your 6-of-a-kind pays are 30x bet Chests, 20x Compass, 12x Map, 6x Snake with four card suits paying 3 down to 1.2x bet for a full line. There are single Gorilla Wilds initially but this is where the Gorilla comes in to play in helping you out with better Wilds and modifiers!

You will see a 3-section meter on the right of the reels. You will also notice many symbols each spin are overlaid with gold coins. These get added to the meter to help you upgrade the Wilds, 30 necessary for each stage. Your upgrades, in order, are:
Stacked Wilds - unlocked, the Wild will appear on the reels stacked 4-high.
Stacked Multiplier Wilds - same as above but will award a random multiplier too.
Increasing Multiplier Wilds - same as above but the Wild will increase in multiplier every time it's used in a win, disappearing after a losing spin. After it does, your game is upgraded to 6 reels and the Sticky Increasing Multiplier Wild is the only one which can appear.
Gorilla Smash - on a losing spin, the Gorilla may wipe out the low-pay symbols which will be replaced by premiums.
We are told Primate King slot can pay up to 3,800x bet.

Primate King slot has a 95.66% RTP and is one of those unfortunately annoying games which commits the player to an extended session in order to unlock the RTP they should have from the start. I can't fault the graphics, sounds or animations but the low win frequency and lack of action makes the game too boring for my liking. It's only possible to hit one Wild per spin whichever modifier they have and you get long dead periods between the odd medium sized win in the 20-75x range. There's many better slots you can play with similar potential but offering it up in a more exciting way...