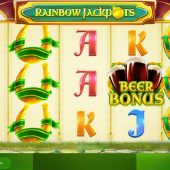 Rainbow Jackpots slot isn't about rainbows, but like Barcrest's Rainbow Riches, has an Irish theme. It's St. Patrick's day release date reflects every tired old stereotype imaginable concerning this theme - now where did I put my comical stick-on orange beard and giant green hat? The soundtrack of Celtic fiddle music and occasional interjections by the obligatory Leprechaun wrap up the remaining requirements for a hammy Irish theme slot. Can all this be overlooked through if the game itself is entertaining? Time to give it a craic! (sorry, couldn't help myself)

When I first saw this game, I was immediately reminded of the icons that appear in Quickspin's Leprechaun Hills slot. So what do we get for these similar-looking symbols? Well, they all appear stacked over the 20 paylines on this 5 reel game including the gold coin Wild on all reels paying 40x bet for the 5-of-a-kind so a full screen would award 800x bet, the top pay of the base game. Next is the gold shamrock at 24x, gold horseshoe at 16x and the Leprechaun's green hat at 8x bet for the 5. the card values make up the rest of the pay icons and range from 4 down to 1x bet. There are two bonus icons, the Guinness Glasses and Free Spins token, both on all reels but we may not need them!

On any spin, the reels may turn blue, and the Leprechaun strolls under the reels from right to left, so you see his hat. If he reappears from the left, he will come out with some inane phrase like "Luck of the Irish" and blow you a bonus from his golden pipe. This can firstly be throwing 3 of either scatter described above onto the reels for a trigger, but we'll view those in a moment.

Symbol swap - he throws Wilds onto the reels or better symbols to create wins, usually quite decent ones.

Mega Symbol Swap - if this happens when this feature is in the box above the reels, he throws mega block symbols down for more winning lines - usually.

Blarney bonuses
Three Guinness glass icons anywhere in view triggers a pick-me. Pick an empty glass which fills and keeps filling as long as you stay ahead of the other two being filled. If the Leprechaun awards these scatters instead of the spin you can get a Triple Beer Bonus and can win up to 1000x bet.

Free Spins are triggered by 3 icons and are simply 5 or more (the game decides) with the big wins more likely to appear in them. If these scatters come not on the reels but via the Leprechaun, you might get the 'Mega Free Spins' in which case you can be given up to 100 spins, and these are guaranteed to contain some 'mega wins'!

Rainbow Jackpots slot ticks many boxes for me, aside from the ubiquitous theme and music. The graphics are decent for what they are big wins in the 15-100x bet range are not uncommon in the base game due to the stacked Wilds being seen reasonably frequently. It's a nice touch when being frustrated by the lack of scatters on the reels to know the Leprechaun can trigger them for you randomly and of course both features have the potential for quite large wins x bet. This game may remind you of the 20-line stacked-symbol Cayetano slots that Paddy Power Games offer and it has a similar RTP of 95.24%. This may well be the rainbow that actually does have the proverbial pot of gold at the end...