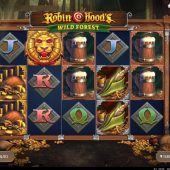 Robin Hood's Wild Forest slot by Red Tiger has reels over a background of a dark forest hideout filled with treasure, presumably robbed from the the rich. These sit in a wooden cabinet that forms the centrepiece of the theme and of course we get some gentle medieval music as we play. Robin Hood and his merry men have provided a fertile ground for slot developers over the years from the classic Netent Shifting Riches slot, the pretty dire Sherwood Showdown from Novomatic but hope did return with iSoftBet's Sheriff of Nottingham. So will our bankroll be added to Mr. Hood's collection of riches, or shall we find him giving to the poor?

We have stacked symbols and only 10 lines on Robin Hood's Wild Forest slot over 5 reels of 3 rows. The 5-of-a-kind pays are 30x Gold Lions, 15x Coin Stash, 8x Hat, 5x Beer with five card values paying 2 down to 1.2 x for the full line. Wilds can appear with various characters and these pay 30x also for all 5 on a line. There are no scatters so we rely on the outlaws for all the fun here!

If you see any one or more land in view they will offer their own unique modifiers to the grid.
Maid Marian - will turn a number of symbols in random position Wild.
Robin Hood - fires arrows to lock a random premium symbol in place. Reels respin until no further of the same symbol are added.
Little John - smashes all the low-value symbols allowing only premiums to replace them

Robin Hood's Wild Forest slot is great for those players who like the occasional flutter on a low-volatility slot like Starburst for example. Your best win is only 300x so variance is gentle which means frequent wins and Wild features. Your RTP is 95.68% which is slightly lower than most slots but as it's all in the base game here you'll not be affected by it. It has perfectly good graphics, sounds and animations which won't become too tiresome but then again, it's never going to be a game which leaves you breathless. If you accept old Robin isn't giving too much away, then by all means enter his forest...