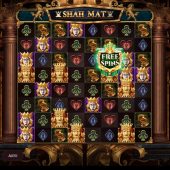 Shah Mat slot by Red Tiger brings us a classy, dark and mysterious middle eastern theme here with nice musical sound effects and graphics. It's got to be better than their numerous other grid-based slots which are generally uninspiring. Having played Jack in a Pot before this, also the slightly better Tiki Fruits slot I am not enamoured, even when they make them fixed pay lines as with the Power Reels mechanic like Zeus Lightning. So can we win a Shah's fortune here or will our bankroll quickly be swept under the mat?

On the grid...
There is an 8x8 grid of 84 individual tiles here on
Shah Mat slot with 5+ adjacent tiles necessary to win. Your highest pays are for clusters of 30+ and these are 80x for the Red Shah and 60x for the Prince down to 4x for the lowest of the 4 card suits. The minimum 5-clusters pay for those 3 respectively 2, 1 and 0.1x bet. The high paying symbols can land as colossal 2x2, 3x3 or even 4x4's at any time. Winged Wilds can appear and will remain on the grid, each time 2 end up adjacent after winning tiles are removed, they will merge to make a multiplier, 1x for each Wild and so-on. This can occur in separate parts of the grid and if two multiplier Wilds merge, they combine their total value. The final symbol is a free games scatter under a green Crown.

Free Games
Collect 3 scatters in a spin to trigger 12 free games with +3 for each one in excess of that, maximum 21. Each scatter during the bonus adds +1 spin. Your enhancement is that any Wild multipliers earned are collected at the top and become a general increasing multiplier as more merge, this multiplier applying to all subsequent wins whether Wilds are involved or not. We are told the best test result was 4324x stake here.

Our View...
Shah Mat slot has a RTP of 95.79% default but can be lower so check where you play. The game does look nice, the theme is done well although it barely hides the tedium which is now standard from a developer that releases hundreds of games, most of them using variations of the same 5 models over and over. You can get some medium-sized hits in the base game via the multiplier Wilds but the best entertainment is reserves as is the case with most slots, for the free games. You'd be lucky to see over 3-500x in them despite this being only a fraction of what the theoretical big hit is. This is one slot I shah-ll certainly be sweeping under the mat..