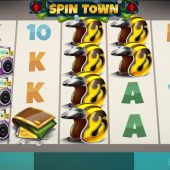 Spin Town slot is quite unusual when compared with Red Tiger's other offerings as we'll discover. The grid is placed over a pedestrian crossing between two pavements with quite a random bunch of stacked symbols and for some reason we have the soundtrack consisting of 1950's American Diner rock and roll music interwoven with what sounds like footsteps. I think this slot tips its hat to the Netent trio of The Groovy Sixties, The Funky Seventies and Crazy 80's games as it seems to have icons that could go in all 3 of them. Let's see if Spin Town won't spin down our bankroll though!

Spin Town slot has stacked symbols on all 5 reels of 4 rows apiece with 40 fixed pay lines in play. You pay 40 coins to play although you can play for 20 coins minimum if you like lower wins and the 5-of-a-kind pays are decent for a slot with so many lines. The various types of Wilds paying 10x stake or 400 coins, Suitcases 300, Helmet 200, Ghetto Blaster 160, Wallet 100, Key 80 with five card values paying from 60 down to 20 coins for a full line of 5 symbols. Spin Town is really all about the various Wild features which we are now going to unravel.

You will notice a red Don't Walk sign over the reels. Periodically certain Wild pedestrians will appear and wait on the pavement to cross and when the light changes to green, they do this in their own ways. You pay for each spin as per normal, they don't award free respins and more can appear randomly of any type bar the triggered Wilds to enter the crossing from either side while the light remains green. The light goes back to red again when the last pedestrian Wilds have cleared the grid.

Sleepy Wilds - a male and female pensioner will cross, one reel at a time. They may doze off and stick to their position for a few more spins.

Speedy Wilds - a lad on a skateboard zooms across, so he won't be there very long.

Couple Wilds - a lady and debonair gentleman cross. If they meet on the same row, they disappear behind an umbrella and become 2x Wilds.

We come to the crux of the game now with 3 different Wild types activated by 3 scatters apiece.

Rock 'N' Roll Shuffle - the famous album cover of the Beatles' Abbey Road is where Red Tiger get this from. Four bad cartoon representations of the fab four will traipse one-by-one into view on the same row when you land 3 Rock 'N' Roll scatters. They are Wild of course and can reappear up to 10 times from the other side of the crossing where they end up. Each time will guarantee at least one 5OAK therefore.

Guardsmen's March - 3 Guardsmen scatters trigger a feature where 1x2 Wilds will march across the crossing, one reel at a time. More can appear as they do, back and forth from either side they exit from.

Hooligan Advance - Get 3 Football scatters and some shouting occurs and either one or two football rowdy Wilds appear on each reel, so you end up with groups of them, often marching back and forth as others join when they disappear. Some big totals usually on this round!

I initially thought Spin Town slot with its basic graphics and cartoon appearance was going to be yet another groan-worthy game. I must say it's very entertaining with some high potential and regular decent wins in the base game via the stacked symbols. Wilds only appear randomly so aren't on the reels but you won't go too many spins without seeing them and getting the green light. The triggered Wild features are far harder to get but can go on and on, accumulating good totals although bear in mind you pay for each spin when the enhancements are in play, same as Netent's Wishmaster. Red Tiger demonstrate a good sense of humour here and give us a good 96.23% RTP into the bargain. I say press the button, await the green light and take the crossing over to this slot if you can...