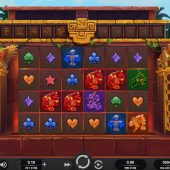 Aztec Ascent slot from Relax Gaming features unsurprisingly an elaborate Aztec temple as its backdrop, includes tribal music and has reels made from stone blocks. Guarded by jaguars, each side has a meter which will no doubt provide some kind of modifiers judging by the top of the temple and its shadowy symbols, so far inactive. Developers love this theme centred around the mysterious civilization and whether a fan of WMS' Montezuma slot or even a modern incarnation such as Aztec Gold Megaways or Play'n Go's Rich Wilde and the Aztec Idols slot, I'm sure you have played one in the past. So can this game mean an ascent for our bankroll too, or like this old culture will it fade into the jungle for centuries to come?

On the reels...
In spite of the 6 reels of 4 rows we only get 40 pay lines here with symbols stacked on Aztec Ascent slot. There are two distinct symbols here, the five high-pay rock carvings of various colours paying 10x down to 4x for 6-of-a-kind and five card suits/shapes all paying 2x for the same. There are Sun Disc scatters on all reels but now Wilds here. You do get two modifiers though.

Relic Random Features
The jaguars proudly perch on a stone column with 5 hexagonal gems either side of the grid. The right has red and the left blue gems to light up. You will notice 5 inactive tiles above each side of the game too, multipliers of 1,2,5,10 and 100x on the right and all 5 high-pay symbols on the left. These can activate together too and they are:
Blue Gems - mystery symbols are created according to how many gems are lit. If all 5 light up, then all 5 high-pay symbols turn to mystery ones revealing the same tile, if say 2 light up then the lower 2 will change to mystery tiles.
Red Gems - if all 5 light up then you get a 100x multiplier on the spin, if say 3 light up you get the 5x multiplier.

Ascension Free Spins
You get 8 to 15 of these for 3-6 Sun Disc scatters. Now the Red and Blue gem collection symbols appear on the game symbols overlaid. You collect 5 and their feature improves, for example on the right, the multiplier would rise to 2x thereafter for collecting 5 Red Gems and on the left the lowest high-pay tile would transform to mystery thereafter for collecting 5 Blue Gem overlays. Each time either side collects 5, you get +1 spin as there's no retriggers here. There is some potential here but the game overall isn't that volatile so don't expect thousands times stake!

Our View...
Aztec Ascent slot has a 96.37% RTP and the base game tends to produce occasional mid-range wins but little else in order to keep you interested. The graphics and animations are average at best but it's not tiring to play overall. The bonus isn't that hard to trigger but unless you get a good start on the gems the returns will be mediocre at best, it really doesn't excite as the format suggest it should. Visit this Aztec temple and I seriously doubt it will be your cash that ascends...