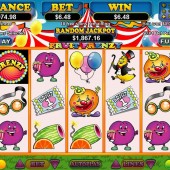 A randomly-awarded progressive jackpot, betting that starts at just $0.03 a line, and some no-nonsense online slots fare: that’s what you get from slot developer RTG’s exciting classic-style game, Fruit Frenzy.

Bright and cheerful, this fruit-based game harks back to the first video slots: lots of fruit, lots of color, lots of fast action. And with 25 pay-lines across its 5 reels, this game certainly delivers to the old-school hardcore.

Taking a different tack on the classic fruit theme, this game is set in a circus populated entirely by fruit: there’s a clown orange, an acrobat pear, ringmaster banana, and a plum in the audience, gleefully chomping on popcorn.

The Clown Orange is No Joker with a 2,000 Coin Payout

Elsewhere making up the symbols are the clown’s car, a cannon made out of a melon (obviously), balloons and admission tickets. The clown orange is the top payer, with a 2,000-coin payout being paid.

The suave-looking pineapple is the game’s Wild, substituting for all symbols other than the two Scatters. Five Wilds pays a nice 10,000-coin jackpot.

There are two Scatters in the game – the ‘Fruit’ and ‘Frenzy’ logos – which pay in any spot on the reels. However, it’s the special daredevil feature that triggers whenever you hit five of a kind, of any symbol, across the reels.

In the bonus round you have three attempts to shoot the daredevil strawberry through the rockmelon target. One point is awarded for a successful hit, with free spins awarded depending on your total points. Free spins wins are also doubled. Not only that, but during free spins, any Scatter prizes you hit are trebled.

As with RTG’s Real Series games, there’s also a nice randomly awarded progressive jackpot to be had. This is always a sight for sore eyes on RTG's slots with some big wins up for grabs.

If you’re into easy-to-trigger bonus rounds, this probably isn’t the game for you. Five of a kind is far too hard to hit on a frequent - or even semi-frequent - basis, and as a result you may want to hunt elsewhere. Luckily there are plenty of cool fruit-based slots out there, nowhere more so than in NetEnt’s Fruit Shop and OpenBet’s sci-fi-themed Astro Fruit.