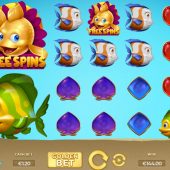 Golden Fish Tank 2 Gigablox slot by Yggdrasil is a sequel to the first which itself was based on the Netent classic, Secret of the Stones slot, later itself to made into a higher-variance version in Secret of the Stones Max slot. You have again a juvenile watery cartoon of fish over the tank's water and transparent reels with soothing classical music to make the overall effect even softer. If you're going to make a silly fishing theme, at least do it tongue-in-cheek as IGT did with Lobstermania slot which also has the B52's great 'Rock Lobster' soundtrack. So anything golden here to bite at the bait of our bankroll?

On the reels...
There are 25 pay lines over the 6 reels of 4 rows which feature stacked symbols on Golden Fish Tank 2. Wilds pay 20x stake for 5-of-a-kind, the four Fish 12x down to 6x and the four card suits all pay 2x. Free spins scatters in the form of Goldfish can appear anywhere. A Chest can land on reel 5 which will offer a prize of 2-500x bet or 5 to 16 free spins very rarely. As Golden Fish Tank 2 uses the Gigablox mechanic, symbols can appear on the reels in 2x2 up to 4x4 in size, even 6x6 in the bonus which can expand the reel rows up to 6 in height. The Gigablox can apply to scatters, Wilds and the Chest too which has better prizes in that case.

Free Games
You need 5+ scatters for the trigger and get +1 spin for all those over 5. You then get a wheel decide a number of 3-7 choices of modifier to apply during them, same as Secret of the Stones slot as mentioned. They are:
Wild fish - 1 Fish symbol is replaced by Wilds on the reels
x2 Multiplier - all wins are paid at 2x
Expanded Reels - you play on a 6x6 set with 40 pay lines.
Extra Wild - 1-2 Wilds randomly added each spin
Fish Stacks - 1 Fish Symbol becomes super stacked on the reels
Extra Spins - 1-5 extra free games
You can pay a 0.2x bet premium for the Golden Bet in the base game which means a minimum of 4 modifier choices instead of the basic 3 after triggering. In some jurisdictions the feature can be bought for 60x bet and you can gamble your modifier picks to maximum 8 but will lose it all if you make the wrong choice when trying to reveal the extra pick! You can pick the same modifier from above more than once too. We're told 5,000x is the win cap here.

Our View...
Golden Fish Tank 2 Gigablox slot has a 96.00% RTP and is pretty tedious. It has nowhere near the quality and drama of the Netent original mechanic in Secret of the Stones. It looks pathetic, pays little in the base game and the free spins are awful as at least 50% of the picks seem to award extra spins which are moot unless you've got a few extra Wild Fish, more rows and a multiplier. More spins here does not a big bonus make. Even if you get decent modifier combinations, the wins aren't that great. I think you need the 6x6 Gigablox to land on expanded reels if you have that in play, with a good symbol. Otherwise forget it, it's just not good. I would take your rod and cast elsewhere because this is the one that got away...