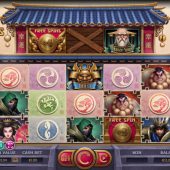 Yggdrasil can usually be relied upon to be creative with their slots and Hanzo's Dojo slot is no exception. A Dojo is a Japanese training school for various fighting arts such as Kung Fu and Ninja so we know the theme and true to it we have soothing Japanese music as the score interspersed with dramatic cymbal crashes as wins appear or scatters land. The reels sit in a temple with cherry blossom trees waving in the breeze in the landscape background, a very genteel contrast to the violent combat taking place in the Dojo. This game is bit more highbrow than Play'n Go's Ninja Fruits and possibly a little less brutal than Novomatic's Katana if you like martial arts themes, but can our bankroll be safe from the slice and dice of these swords?

Initially the 25 lines seem to be on a standard grid of 5 reels and 3 rows, but look above the centre 3 reels and you'll notice 3 single symbols spinning too, like those you see under the centre reels on Extra Chilli but this time the icons aren't the same as those on the main reels. We can reveal the importance of those later, but for now the line pays can give an indication as to our volatility and potential. The Sumo pays 235 coins for your 25-coin bet if you land a 5-of-a-kind combination then we see the Warrior, Geisha and Ninja awarding 200, 180 and 160 coins respectively. No card values, instead we get coloured tokens paying 60, 50, 40 and 30 for the red, purple, blue and green in that order. There are scatters on all reels and single wilds on reels 2 to 5 and that's it for the standard grid.

Those single extra symbols appearing over reels 2, 3 and 4 have very special meaning as they spin every time you play and can help in various ways. The wooden posts are simply the dead icons, and the Wilds when appearing will spread down to the main reel below them if any appear on one to all three.

If you see Hanzo appear nothing will happen unless you get him in all 3 positions, and the Rooftop Wild actually substitutes for him as well. In all 3 positions he will turn himself into a symbol from the grid (except the scatter) and expand downwards to fill the centre 3 reels of the game with a giant 3x3 block of the selected symbol. You will then get 3 re-spins with this in place. If Hanzo spins are triggered with 3 expanding Wilds then the 3x3 symbol will also be a Wild. You cannot retrigger this but any Rooftop free spin scatters appearing award one extra spin and will award one enhancement from 2x multiplier, Wild reel 5, 2 extra spins or win both ways.

The Rooftop free spin scatter awards 4 spins plus one of 5 enhancements, so if you land all three without any on the reels below you'd get 12 free games with block symbols only on reels 2, 3 and 4 but usually you'll trigger with the bottom reels or two scatters on the bottom and one on the Rooftop.

All the reels have a basic scatter which awards 3 free games so if you land 3 or more you'll get 9+ free spins. In free games there are only giant 3x3 symbols on the middle reels but if say you got 2 scatters here and one on the Rooftop you'd then get 10 free spins (3+3+4) and one random enhancement as described above, but with a nudge one added to the options. This will ensure all block symbols appear fully in view if you're lucky enough to get it. Any scatter on the Rooftop will give an extra spin and another enhancement. The Wild reel 5 is useful as you can imagine!

Hanzo's Dojo slot is a very good all round game. The graphics and sounds are great and the game mechanic very good with frequent Hanzo's Re-spins in the base game which are exciting to watch and can be very rewarding. The RTP is the standard Yggdrasil 96.10% and there is potential to win up 3000x bet in any free spins bonus, for which you'd need the right enhancements in play such as Wild reel 5 in conjunction with a multiplier. If you are lucky enough to see all 3 Wilds expand from the top the pays can also be big considering you'll have 3 reels Wild for all three re-spins and may even earn an extra spin with the further enhancement that comes with it. A trip into Hanzo's Dojo may not be the house of pain that you expected... 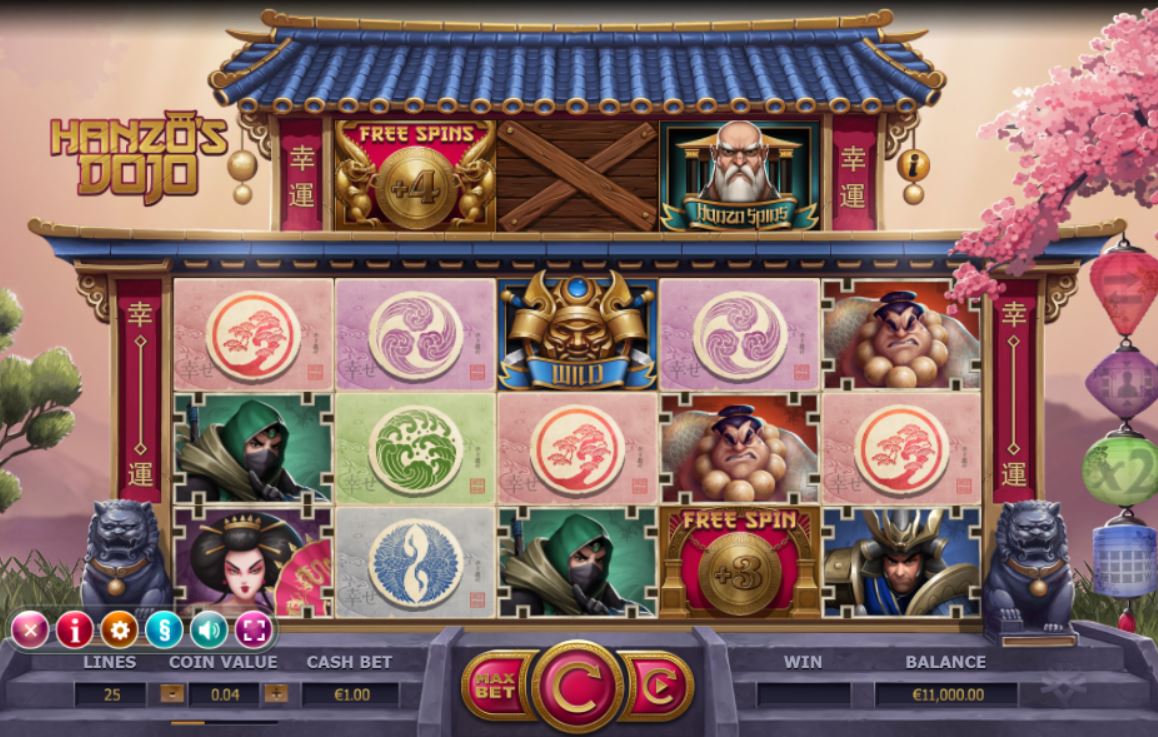