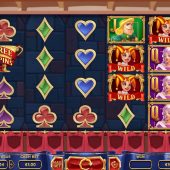 The Royal Family slot by Yggdrasil has a medieval look so don't fret, it's not about Harry and Megan or anything topical. You get jolly classical music with the grid over a cartoon castle background and jovial looking icons on the grid. You have elements of Play' Go's Royal Masquerade slot here combined with IGT's old classic Medieval Money but neither of those games were much good so let's hope there's a bit more potential here. So will it be knighthood or the chopping block for our bankroll?

We begin with a grid of 5 reels of 4 rows and and 25 fixed pay lines on The Royal Family slot. Symbols are stacked too and you'll notice 2 collection spaces under each reel but we will come to that later. For now the 5-of-a-kind pays are Blue Knight, 10x bet, Red King 8x, Purple Queen 7x, green Knave 6x with four card suits paying 70 down to 40 coins for our 25-coin bet. Free spins scatters appear on all reels as do Wilds which presumably pay the same as the top symbol. There aren't any random modifiers but there's plenty to check out here!

You get 8, 16 or 24 for triggering them via 3, 4 or 5 Trophy scatters on the reels but there is another way too. If you see the Royal Chest land on reel 5, you get 5 cards to pick from which can give you any of those free spins amounts or far more likely a cash award of 4 to 100x bet - expect 4, 6 or 8x though! If in free spins you get 2, 3 or 4 extra spins or 1 to 3 extra sticky Wilds. Any picture symbols landing will spin and may or may not turn to sticky Wilds as with Vikings Go Berzerk slot. There are more benefits to be had though via the collection spaces under each of the 5 reels, at least some of which you should port into your free spins round.

So what can we get under the reels? You get Red Shields which giv e 1, 2 or 3 extra starting Wilds, Blue Shields which give 1, 2 or 3 extra spins or Purple Shields which remove one card value from the reels. Those are the Common Prizes. If lucky you may collect the Rare Prizes too. These are:
Gold Dagger Reel 1 - gives 2 extra spins, a 2x starting multiplier and 2 starting Wilds.
Crown reel 2 - gives a 4x multiplier.
Orb reel 3 - awards 2 Wild reels.
Necklace reel 4 - awards 6 starting Wilds
Gold Key reel 5 - awards 9 extra free spins.
So with all these possible multipliers and sticky Wilds there is certainly some potential here and you can also retrigger the free spins via scatters.

The Royal Family slot is colourful and has a great feature format - when you can actually trigger it. It's really a hybrid of Baron Samedi and another of their slots which offers accrued modifiers to the bonus, Vikings Go Berzerk. The RTP is 96.10% and base game play is really a bit boring as wins aren't that frequent and it relies heavily on the reel 5 Chest to award small wins and almost never the free spins which can grate after a while. Having said that, once you accrue some sticky Wilds in the bonus and the Chest lands regularly on reel 5 then those extra spins can really help a big total grow and the feature becomes quite exciting. The Feature Prizes below the reels can be hard to collect too, but again when you do expect some decent wins in the bonus! Just be aware that this is a rather volatile Royal Family...