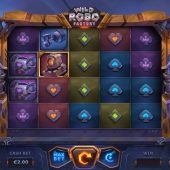 Wild Robo Factory slot by Yggdrasil Gaming revisits the industrial and sci-fi theme they applied to their Reptoids slot first, then Power Plant and more recently the Incinerator game. To that end we have a grim metallic control room in which these robots reside and music which sits between creepy and futuristic as we open up the slot although it does cheer up a bit when wins drop in. The reels shake to the clashing of metal and sparks fly around them too, but is it enough to ignite our bankroll or will it be flattened under these mighty automatons?

On The Reels...
An Yggdrasil speciality is having a larger grid of 5 reels and 4 rows for only 25 pay lines and that's exactly what we begin with here too. Symbols can appear stacked and your 5-of-a-kind pays are 15X orange Robo, 7x Purple, 6x Green, 5x Blue with four card suits all paying 2x bet for a full line You get free games scatters on all reels but the Wilds are what Wild Robo Factory slot is all about, as the title would suggest.

Modifiers
You get variations of Robo Wilds in the base game, randomly created. These will move leftwards and eventually off the reels for each free respin although more can appear before they do. They always appear on the conveyor belt under the reels and begin their migration leftwards one reel at a time from the reel they initially appeared under. They can be single, Stacked Robos up to 4 rows high and also have a mutlipler as 2x Wild Robos and even appear 2 reels wide as Wild Twin Robos, those possibly with odd shapes such as a Wild Pattern Robos. So there is plenty going on in the base game if the right Robos appear.

You may also find one of the card suits turns randomly on the reels after a losing spin to a high-valued Robo symbol, maybe awarding a win.

Free Robos
There are Screen Scatters on all the reels and 3 or more of these award what are called Free Robos but are in effect free spins. You may also see a Robo scatter on the conveyor which could come in useful if you land only 2 on the reels while it is present. A Robo will be initiated on the conveyor belt on 5 separate occasions so you'll get the Robo respins 5 times, hopefully with the bigger and better Wild Robos appearing!

Our View...
Wild Robo Factory slot is zany to say the least but it's quite fun to watch as you never know what type of Robo Wild will appear on the factory conveyor next. There are some pretty big base game hits possible too here and Yggdrasil give us a slightly higher RTP than usual with 96.40%. The free games, or Free Robos, aren't easy to trigger but they do tend to convey across the more productive Robos during them and thus are fun to watch as well as having some potential for bigger wins, repeated too if the Robos are 2-reels wide. All in all this is one factory that isn't a grim as it appears at first, so I may well put another shift in sometime soon...