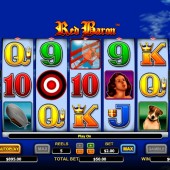 It is not often that the German side of World War I and II is glamorized in Western culture but it appears that Australian slots developer Aristocrat has decided to base its theme for this Red Baron slot on the top German fighter pilot of World War I.

Red Baron slot is a 5 reel, 243 ways to win slot with the Manfred von Richthofen, the “Red Baron” himself, taking centre stage. He was a hero in the eyes of the German people and an arch nemesis for the Allied forces until his death in combat on 21st April, 1918. He divided opinion depending on which side you were on but nobody could doubt the respect he earned from his skills as a pilot during the war having achieved over 80 air combat victories during his time with the Imperial German Army Air Service.

Can You Feel the Reel Power?

Symbols on the reels in Red Baron slot are all associated with the German war effort in World War I and they include the “Red Baron”, his fighter plane, his love interest, a blimp, dog, radio, and the regular 9-through-to-King symbols.

Earn up to 5x Wild Multipliers

The Wild symbol is represented by the combat medal. This symbol substitutes for all other symbols on the reels to complete any potential winning combinations across the reels. The Wild only appears on reel 3. During the free spins bonus round, it is possible for wins triggered by a Wild to earn up to a 5x multiplier.

Win 15 Free Spins with up to 180x Mission Multipliers

The free spins bonus round in Red Baron slot is triggered by hitting three of the target Scatters on reels 2, 3, and 4 at the same time. This will see you win 15 free spins. You are then asked to select one of five missions. Each mission lists a number of planes you think will be hit during the free spins. There is also a bonus mission if you're feeling extra lucky. The missions are listed as follows...

Red Baron slot is one of Aristocrat's more noteworthy slots. Reel Power is always a good feature to see on their slots. If you've played the historical Pompeii slot or the Chinese-themed Choy Sun Doa slot then you will know what it is all about. The best part for me about this slot is how it ties the free spins bonus round into the legend of the “Red Baron”. The fact that taking down planes wins you prizes forges that link and the more planes you down, the bigger the wins. I think this unique aspect to the slot sets it apart and if more slots have individual features linked to their themes then it would make for a much more varied market. Credit to Aristocrat for doing it.