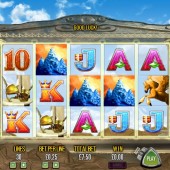 Slots developers struggling for some inspiration have traditionally tended to plump for tried-and-tested themes when coming up with new games.

Already a winner with the land-based crowd, the Aussie developer's 5 reel, 30 payline slot sees you in a world of angry gods, curvy princesses, and plenty of thunder and lightning (very, very frightening).

As well as our bearded Zeus throwing around thunderbolts like a petulant teenager, there's a beautiful goddess with auburn hair, gold helmets, goblets, Mount Olympus, winged horses and tornadoes. The 10-through-Ace symbols are present and correct too to fill out the reels.

Get a Bonus with Your Free Spins

If the bearded Zeus symbol appears, you will be awarded with a Lightning Bonus. The Lightning Reel goes Wild to give you more wins. Get five "Thunder Kings" on the reels and you'll have a full screen of Wilds! This wild symbol substitutes for all symbols except the Scatter.

In addition to the Lightning Reel, for each further Thunder King symbol that appears on your screen during the free spins, you will earn yourself a Tornado bonus. The Tornado symbol acts as a Wild and it stays in the window at that position for one or two extra games.

A Snow bonus can be awarded if you hit even more Thunder King symbols during free spins. The prize of the Snow bonus is between 1 and 100 credits, and it is multiplied by the total credits bet.

Renowned IGT slot Thunderstruck 2 is the daddy when it comes to free spins and chances to win, but with enough play, and plenty of free spins bonus features, Thunder King slot could come close to claiming Aristocrat's crown. Another IGT slot in the form of The Legend of Mount Olympus is a slot that will also appeal to fans of this title.