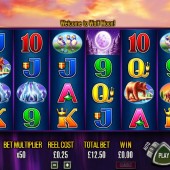 Look out! It’s another wolf-themed slot! This time the shock new release comes from the minds at Aristocrat and this Wolf Moon slot hits the online market having been a resounding success for the developer in land-based casinos the world over.

Wolf Moon is a behemoth 6 reel slot with Xtra Reel Power that has a similar feel to other wolfy slot releases such as the incredible Wild Wolf from IGT and Winning Wolf by Australian slot developer Ainsworth.

The symbols on the reels of this slot are surprisingly not too wolf-orientated. It is more to do with North American wildlife in general. Symbols include moose, puffins, bears, and wolves.

The Full Moon is Wild!

The full moon acts as the Wild and substitutes for all other symbols, except for the Scatters, to complete winning combinations and give you a great chance of triggering some big wins.

Win up to 40 Free Spins in the Lucky Zone Bonus

The Scatters are represented by the hypnotic wolf’s paw in an emerald star symbol. If you hit three or more of these symbols across the reels then it will trigger the Lucky Zone Bonus. In this feature, you will be immediately awarded at least 12 free spins and up to 40 free spins, depending on how many Scatters you triggered the bonus feature with.

Can You Feel the Xtra Reel Power?

This bonus feature is not just about the free spins. It is called the Lucky Zone Bonus after all. This is where the slot gets its Xtra Reel Power series name from. Basically, the middle two reels are sectioned off by a Lucky Zone border. If one of the full moon Wilds appear in this zone on the two middle reels during the free spins then every position on the reels in the Lucky Zone will turn into a full moon Wild. The two middle reels are then held for one free spin with the full moon Wilds covering the entire middle two reels. This has the potential to cause absolute payout carnage.

Wolf Moon clearly gets its reputation from the importance of the Wild symbol on this slot. It’s a fantastic feature to include and is a breath of fresh air for myself as I have reviewed endless slots recently where it has your generic free spins bonus round or Pick ‘em Bonus and that is it. Wolf Moon is slightly more innovative and I like that.