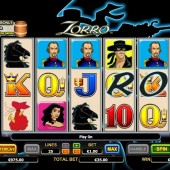 If you forgive the 8-bit graphics, the appalling sound, and the cheap animation, there's actually quite a bit to enjoy about Aristocrat's swashbuckling slot, Zorro. OK, it might not have the bonus features of the Aztec-themed Fire Light or the slickness of travel-inspired Big Ben from the same Aussie outfit, but it's fun all the same.

The game is played over 5 reels and carries 25 paylines of action. Bets run from 0.50 to 100 a spin but - like Aristocrat's Lucky 88 slot with its 'Extra Choice' betting - you can add on a few more bucks per spin to have a chance of bagging the Zorro Bonus. This is a great little aspect of the slot because it gives more flexibility to the players.

Spell Out Zorro to Win a Prize

The Zorro Bonus will actually cost you 10 coins x your coin bet, but it's worth the extra cash. You'll notice the letters Z, O, R, R, and O appearing on some of the poker symbols - J, Q, K, and A. If you spell out 'ZORRO' anywhere on the five reels your bonus starts. There's a random bonus prize to be won, achieved via several bonus features.

Earn 500x Your Bet in the Tornado Bonus

The Tornado bonus in Zorro slot is an instant cash prize of up to 500x your line bet, while the Gold Coins bonus is a match bonus where you choose gold coins to reveal prizes that need to be matched. A multiplier is also revealed and applied to the cash amount.

The Wild Z feature is hit when you land three Wild Z icons. You will win 3 free spins. The Z remains in place for the whole duration of the round and substitutes for all symbols except the Scatters.

Finally, the Magic Door feature in Zorro slot requires you to select a door to reveal a character - Zorro, Juliana or the nasty Monastario. Five games are rewarded and if that character appears you'll win a prize (500x, 750x or 1,000x your line bet).

Zorro slot is a lovely game to play, but it's pretty high variance. Triggering that ZORRO on the reels is the only way to guarantee any substantial wins, and you'll have to playing at the higher bets to achieve that. Having said that, fans of the original TV series or more recent movies will lap it up. Other top slots from the same developer include the mining-themed Where's the Gold and the slot from the Great American plains - Buffalo. Both of which are equally good in their own right.