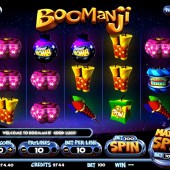 Not to be confused with the Robin Williams adventure film, Jumanji, this fireworks-themed slot from Betsoft Gaming is all about fireworks. More fireworks. And yet still more fireworks.

At first glance it's hard to recognize this simple 5-reel, 10-payline slot as one of Betsoft's - there's no slick animation or deep back story. There's not even that much in the way of variety on the reels. However, what you do get is fast gameplay and Betsoft's customary eye for precision.

With fewer pay-lines and a minimum bet of $0.02, this will obviously appeal to fans of simpler games, and that plays out on the reels too. There are no 9-through-Ace card symbols, just fireworks - lots of fireworks. Rockets of all colors, big fireworks, small fireworks - all in all it puts the 'boom' into 'Boomanji'.

On top of that, there are some really nice ambient electronic noodlings in the way of music, and the fireworks sound FX themselves are great when you hit a winning combo, making you feel like you're in the middle of a casino every time you win.

No Bonus Rounds? How About Some Expanding Wilds?

I mentioned the game was a little on the simple side, and that's evident in the bonus rounds - there aren't any. In fact, the slot's only real bonus is the Wild, which substitutes for every other symbol, and is expanding.

When you hit a Wild symbol on reels 2, 3 or 4 - the box of fireworks symbol - it will expand vertically to fill the entire reel.

The Expanding Wild awards players with one re-spin and the Wild will hold for that re-spin. If you are lucky enough to hit an additional Wild symbol, you win another re-spin.

Other than the Expanding Wild, that's about your lot. No progressive jackpots, no animated figures standing at the side to launch into a song-and-dance routine whenever you hit a winning combo. However, it's good to remember that the game pays both left to right and right to left on the reels, so there IS potential for lots of nice little regular wins.

In tone, Boomanji is a little like the diamond-themed Starburst from developer, NetEnt, or the same developer's Elements slot: quick 'n' easy gameplay and a minimalist tone overall. That's fine for slots fans who aren't bothered about long intro videos and in-depth gameplay. On their day they're fine, but for me, give me NetEnt's Scarface anytime.