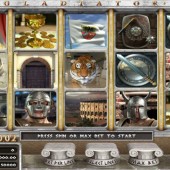 Although at first glance, this 3D effort from Betsoft Gaming looks like it’s based on the 1999 film starring Hollywood’s walking grump, Russell Crowe. Don’t be fooled, however; this slot, although slick, is totally separate from Playtech’s own official movie tie-in slot of the same name.

The 5 reels in this 30-payline slot are filled with plenty of roman-themed icons: the armored gladiator, the Coliseum, a tiger, swords and shields, gold coins, flags, beautiful empresses, horses, and warriors.

Betting ranges from the usual Betsoft parameters of $0.02 to $1.00, with a $150 maximum bet available. The reels spin pretty majestically and there’s cheering from the Coliseum crowds when you hit a winning combination. Sweet animated sequences play out too.

Five Scattered Coliseum icons pays out the most – a max of 3,750x your line bet if you hit five on the reels.

However, it’s the human characters we need to watch out for.

Hit the princess symbol in the first position on any reel and you’ll trigger the ‘WILDX2’ feature. Our beauty will toss rose petals across the reels. As they touch the symbols they are turned into 2x Wilds, multiplying any winning combinations they help form by 2.

A Gladiator Scatter on Reel 3 triggers the Gladiator Smash Wild Bonus feature. A marble slab covers the third reel. Our hero walks out and smashes the slab to reveal the entire third reel turning Wild.

Hit the Portcullis Scatters to Trigger the Pick 'em Bonus

A simple Click Me Bonus triggers when you hit three or more portcullis symbols anywhere across the reels. Simply choose a door to open and reveal an instant win prize. Keep selecting until you hit the Collect sign.

Prepare For Battle in the Feature Bonus

Last but not least is the game’s centrepiece: a Battle bonus feature triggered by hitting the Hero, Coliseum and the Villain symbols in a row across Reels 2, 3 and 4 (although that's easier said than done).

You’ll be taken off to witness a duel to the death – simply pick a winner and hope your blows get through. As with Random Logic's cracking prehistoric-themed slot, Dawn of the Dinosaurs slot, you win cash for every blow you manage to land on your opponent.

Skill-based slots are slowly creeping into online casinos’ portfolios of games, and while there isn’t exactly a lot of it in Gladiator, it’s surely a sign of things to come. If you’re hot for some more Rome-based tomfoolery, check out NetEnt’s history-themed Victorious slot, while RTG’s similar take on the Rome theme – Caesar’s Empire – hits the spot on most levels.