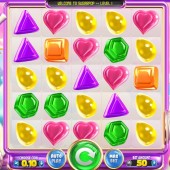 No doubt, if you’re a male in a relationship then you’ve seen the full impact of what a Candy Crush Saga addiction can do to your sanity. You're probably in denial about your destructive addiction. But the world needs to face the facts - a Candy Crush Saga pandemic is sweeping the globe.

Just When You Thought It Was Safe...

Now, thanks to 3D slot developer Betsoft Gaming, it appears that this Candy Crush Saga addiction is going to transfer to the online slots. We were lucky with NetEnt’s fruit slot Reel Rush and the legendary Da Vinci Diamonds Dual Play in the fact that they were superb slots. Now we face another threat from a Candy Crush Saga-style slot.

It's All About the Color

Betsoft Gaming’s slot release SugarPop is one of the most colorful and effervescent slot releases in recent memory. This is all about the vibrancy on the reels and if kids were legally allowed to play slots then it would certainly be one they would enjoy.

Watch the Symbols Disappear with a Pop!

This slot has 5 reels and has an all ways pay format. The winning combinations are almost endless and that is where the fun begins with this slot.

To complete a winning combination you will simply need to hit three of the same symbols in a row. The reels are jam-packed with symbols that consist of fruit-shaped sweets. The reels also don’t spin but rather the symbols drop down from the top of the screen in a Candy Crush Saga fashion.

The way the reels operate is not the only way that this slot is similar to everyone's favourite slice of social media mayhem.

Any winning combinations you hit will then see the symbols that make up that winning combination explode and disappear with the above symbols dropping down to fill the gaps left. This Tumbling Reels process means that fans of IGT’s fantasy-themed Dungeons and Dragons: Crystal Caverns will warm to it immediately.

SugarPop is different to regular slots in the way that when you hit winning combinations you do not only win instant prizes or coins. Instead you build up points as well. If you build up enough points then you will move up a level.

Try and Hit Those Special Candies

It is also possible to unlock Special Candies that come in the form of symbols such as Jelly Beans, Cotton Candy, Caramel Chews, Lollipops and many more.

If you hit some of these symbols in your winning combinations then it will increase the amount you win overall. There are nine Special Candies altogether and each one will also trigger a unique feature that will increase your points and winnings.

Overall, this slot is a bit too hectic for me. Even after playing I wasn’t really sure what the whole point of it was. Stuff just seemed to be happening for a reason but also at random.

The wins were rarely overwhelmingly large and it did not take long for me to despise this slot as much as I despise Candy Crush Saga.

It is clear to see that Betsoft Gaming are trying to latch on to the Candy Crush Saga market and launch it on the slots platform but it’s really not for me. It appeared fun at first but in retrospect that was just a novelty.