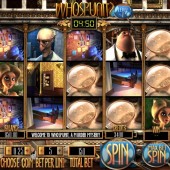 Online slot developer Betsoft Gaming have a string of thrilling slots to their slots portfolio including the detective-themed After Night Falls, the bank robbery-themed Heist and the atmospheric The Slotfather. Whospunit? is the latest slot from the developer to try and whip slots players up into a frenzy.

Unfortunately, for Betsoft Gaming and the slots players, this slot ends up being a bit of a damp squib. At first glance, it appears to have everything.

There is the murder mystery storyline, the intensity of not knowing who the killer is, and even the characters have some depth to them. But is there anything beyond the attractive 3D exterior?

This 5-reel, 30-payline slot has a lot going on. The symbols are represented by the characters from the story and from the very start you are thrust into the plot with a countdown timer telling you how long you have until Detective Mode begins. We shall get onto that shortly!

Collect the Stars to Find the Clues

The regular game sees you spin the reels as normal. You must collect stars throughout your spins and these stars can help you achieve clues that can help you to try and work out who the murderer is.

The number of stars you earn depends on the winning combinations you hit during the regular spins. There is an evidence icon in the bottom left that you can view at any time to review the clues you have earned.

When you countdown timer reaches zero then Detective Mode starts. My initial thought was that the fun was about to begin. I was severely let down by this excitement!

Detective Mode was nothing but a tease like one of those arcade machines that uses a pincher to pick up cuddly toys but always drops the toy before it reaches the drop box.

The trouble is, there is very little chance of you making it past the first level in Detective Mode so the rest of it is redundant for a lot of the time. You will simply find yourself going round in circles in the regular game picking up minuscule wins as you hit winning combinations but not really winning anything worthwhile.

Now, I never got the chance to unmask the murderer and I was playing for a while but the game boasts that you can win up to 320,500 coins by doing so. I will take their word for that; I didn’t get anywhere close.

Whospunit? just feels like such a disappointment. When someone told me about its release they pitched it as a Cluedo slots game that is better than the actual Cluedo slot by IGT. It isn’t. Cluedo is much better.

This slot should just be condemned to some kind of slots fraud archive. You might end up enjoying this if you are a masochist or have some deep-lying mental issues. If the countdown timer doesn’t turn you homicidal then the irritating laughter of the detective at regular intervals will.

I would go as far as to say this is arguably the most mind-numbingly boring and least productive slot I have ever played.